Down the Resin Rabbithole

It's been awhile since I've posted. This isn't to say I haven't been busy. In fact I have been painting those Aztec Dungeon tiles I had got in the kickstarter. It's a 2 stage process with first the green, & then brown paint..so I've been using my lunch hours to work on them. As I had already posted about them, I didn't want to add a bunch of posts of pretty much the same thing.

However, also during that time, I went & ordered an Elegoo Mars Pro Resin printer. As I've barely scratched the knowledge surface on the Anycubic Mega-S, this may seem a bit premature. The reason is that many of the kickstarters I've supported for 3d print files came with both figures & terrain. So with the terrain covered, & being stuck at home for this pandemic, I thought it was an opportunity.

First things first, I had to rearrange the basement layout to accommodate this new workspace. 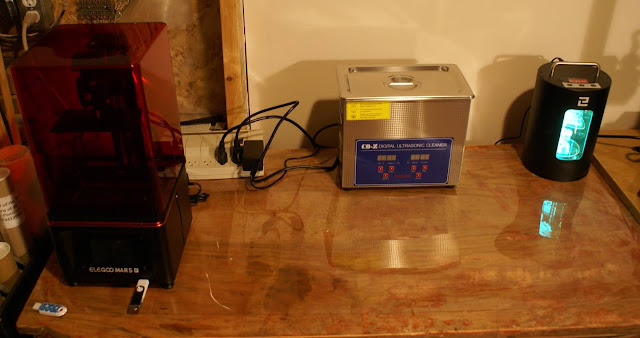 My first attempt at printing the test pieces didn't go so well...so I hit the pause button. Waited a week for the ultrasonic cleaner to arrive. 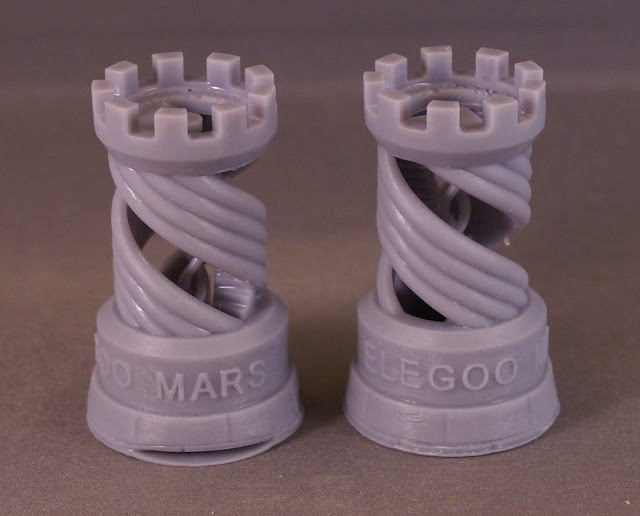 So this time it worked, though not perfectly. What caused the split in the one on the left? No idea. I also wanted to avoid using the harsh cleaners so after watching some Youtube, & then a recent facebook post about using Awesome from the dollar store...I went & bought a couple bottles. I don't have as much concern about disposing of this vs white spirits. I've also ordered a couple bottles of the water cleaning resin & will likely stick with that once the current starter bottles are finished.

Next will be my first attempt at one of the miniatures using supports. Lot's to learn!

Posted by Terry Silverthorn at 9:27 PM