EWG - Aliens: Another Glorious Day in the Corps

Tonight we had 2 games running at the club. Jonathan brought out Thunder Alley, which he & Scott played.

The other 5 of us played Aliens: Another Glorious  Day in the Corps. 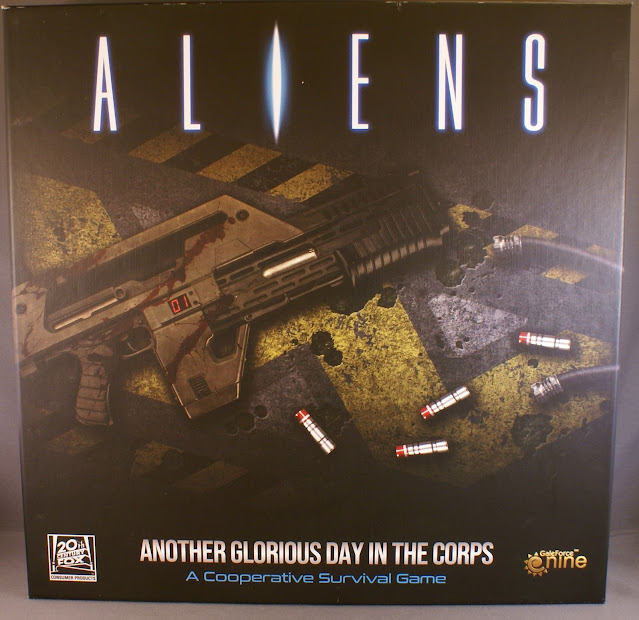 This was the first time I got to play this game. Dan ran it for us, with his wonderfully painted figures. All of the Movie characters are there as options to run, each with their own special abilities. 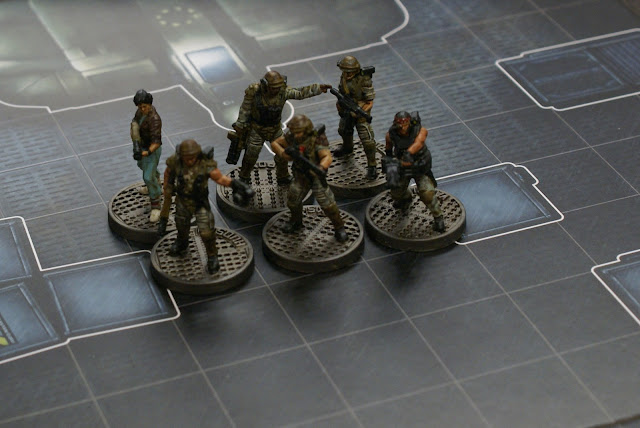 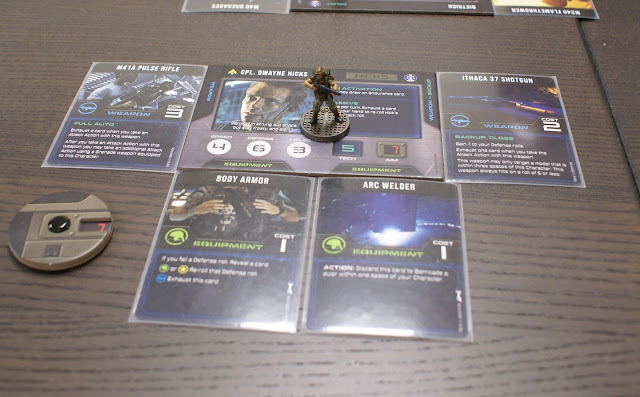 As we entered, our mission....find Newt & get her off the table. How hard could it be? 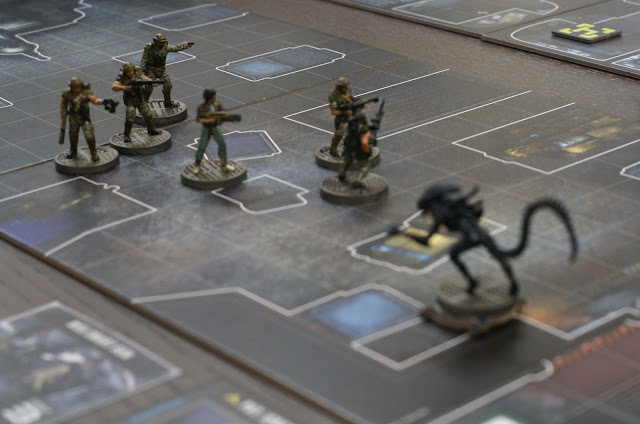 Apart from Dan, none of us had ever played, so we didn't really grasp all the card mechanics. It wasn't until mid-game we discovered that event cards could be played at any time (with the exhaustion of cards)

Each time you perform various actions, it uses cards which are moved from the Ready Pile, to the Exhausted Pile & finally to the Discard Pile. So for example, firing your Pulse Rifle would exhaust a card. If you fired again, another card is exhausted. 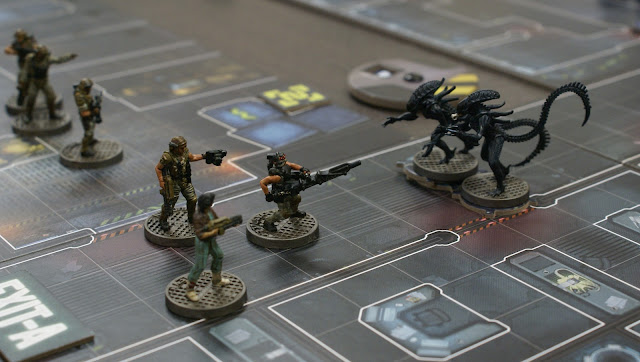 To say it got out of hand quickly would be an understatement...."Game Over Man!"

However we all enjoyed the game & look forward to giving it another play now that we have figured out the mechanics. Thanks Dan for bringing it out!

As I watched the club event post to see if anyone would step up to run an event....Monday came with nothing but Crickets. So I scanned my shelves for a game that would be club worthy (quick to learn, has several players & doesn't take long to play)

This week I chose Bloodborne the Card Game 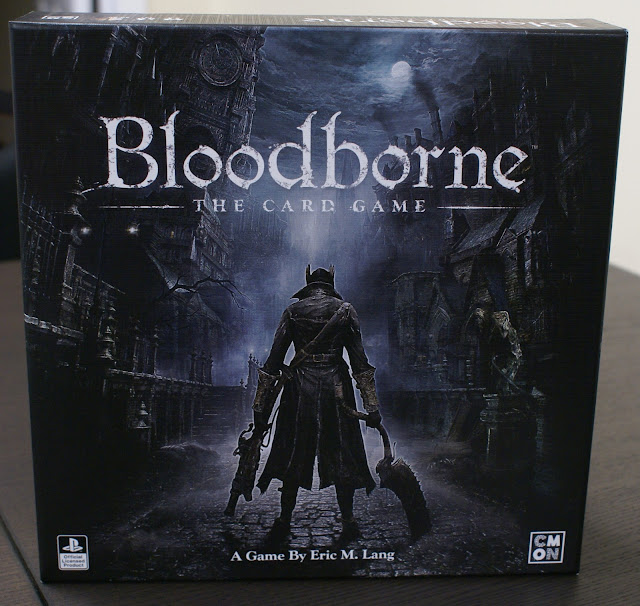 After watching a How to Play (can't say enough about how great these can be, especially with heavy rulesets), I got all the cards sleeved & ready 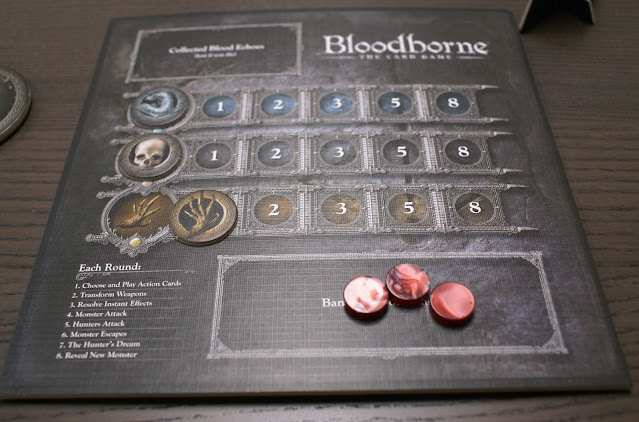 In the game you play a Hunter who teams up with other hunters to enter the dungeon slaying the many funky creatures that dwell within, on your way to defeat the Final Boss.

Your player board is used to track the blood echoes you've received as well as stored. You also track your trophies from you kills. 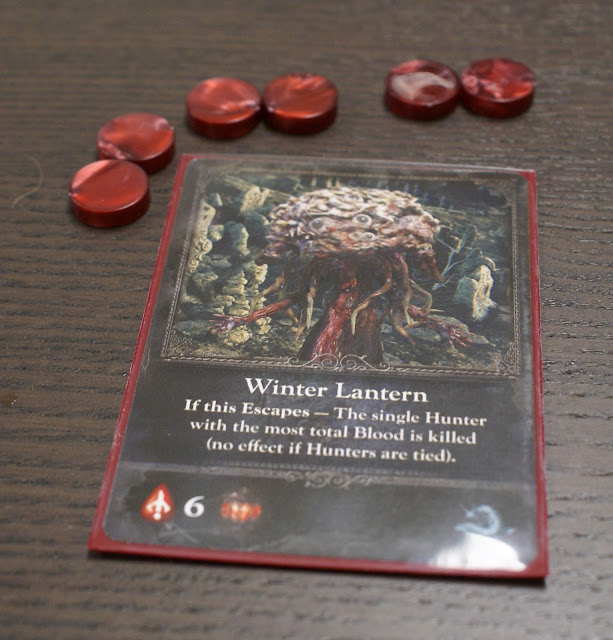 This is where it gets more involved....even though your 'working' together, your also going for bragging rights of having the most Blood & trophies, using some of your abilities to thwart the other hunters. There are weapon upgrades - like the cannon -  that will actually damage every other hunter. 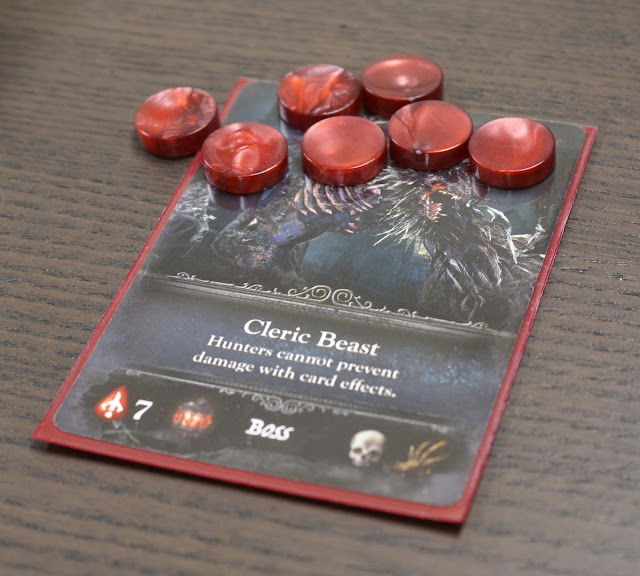 Each of the monsters within have variable abilities, hit points & what colour of damage dice they throw. After working your way through (normally) 10 lesser critters (3 bosses, 7 normals) you engage the final boss. I think we all enjoyed the game & I've now added the expansion for the next time we play!