During my painting session today, I was hoping to finish Chunk & then get the other 2 figures from the gang well under way. Alas that wasn't to be, but I am sure you will appreciate why. 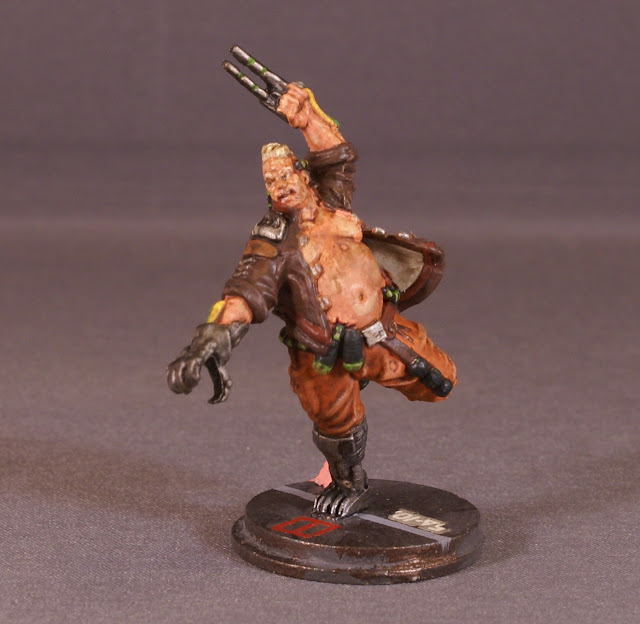 Another excellent figure from Core Space, here is Chunk, a veritable 'Meat Puppet' fueled by drugs.

So I was finishing him up earlier this afternoon & the whole 'Meat Puppet' & looking at his pose got my twisted humour amped up.

So what better than to add what oddly looks like Gum, albiet a massive wad of it, stuck to his raised foot! 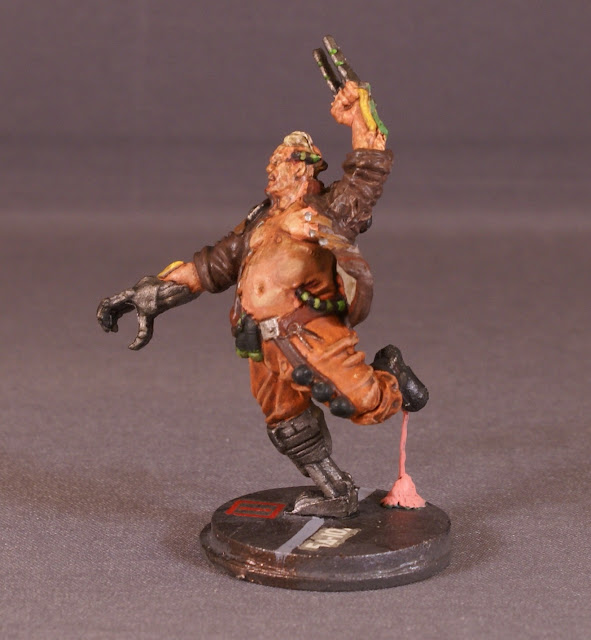 And here is the back view. So it was made from a bit of greenstuff & a piece of brim plastic from one of the 3d wood piles I had printed. (Luckily I hadn't thrown out that bag of garbage from the hobby table yet) 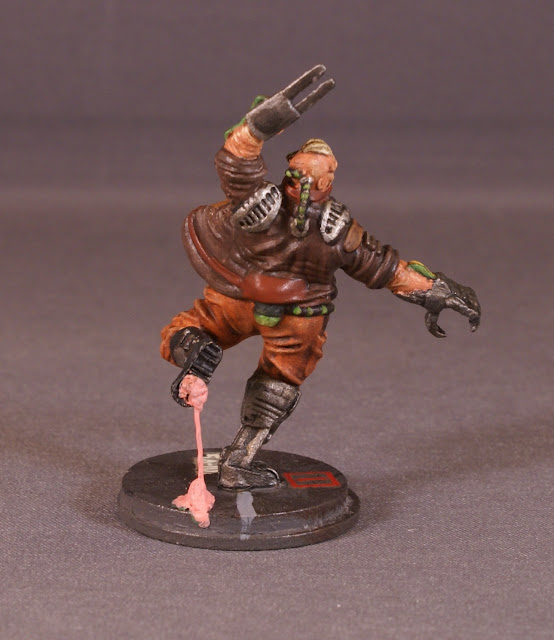 As all the miniatures I've been painting this winter, they will all be getting a taste of Dullcoate once spring arrives.

I am now painting the next member of the gang ---  Hobb. Thanks for visiting

Yesterday was a good day. After watching facebook's Bloodbourne arrivals all over the world, I was waiting for the arrival of my Kickstarter pledge. Last week I got the notifications of shipment & yesterday afternoon.... 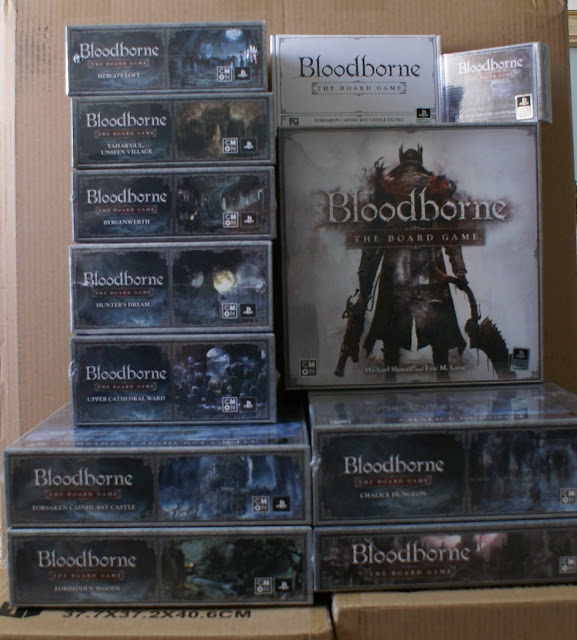 It arrived! Now where to put it all? Next will be opening up the boxes to ensure everthing arrived without issues.

Having completed the current crews I have (I don't seem to have the crew of the Yamato---yet), I am starting on the Gang, led by the Infamous Zed 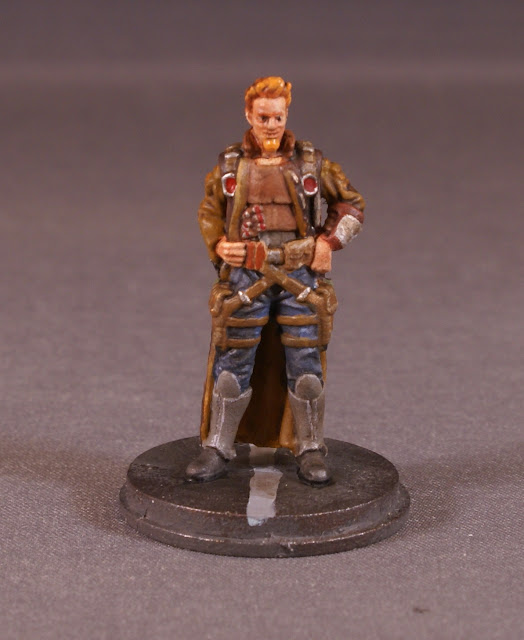 A very nice figure, with a lot of detail. 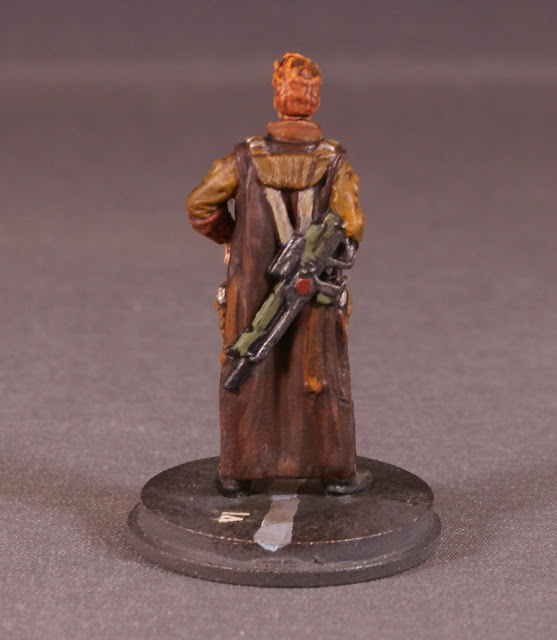 As leader of the gang, he is supported by quite a cast of characters.The next on the bench is Chunk, followed by Evangeline & 1 other. There are a couple other figures that I didn't seem to get on the first Kickstarter, so will be looking at picking those up too!

As alluded too in my previous post, I had printed a woodpile on my 3d FDM printer. As I began to cleanup the first one, I was quite happy with how it was looking, so launched a second one. 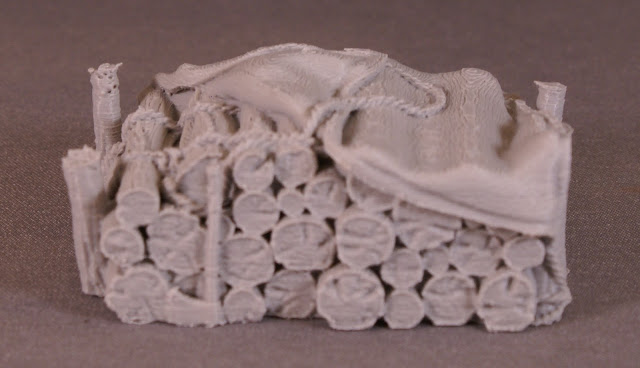 Now I had hoped to give credit where it was due & link to the originator or kickstarter this came from, but sadly I couldn't find it. Perhaps someone seeing the post will know & can comment. 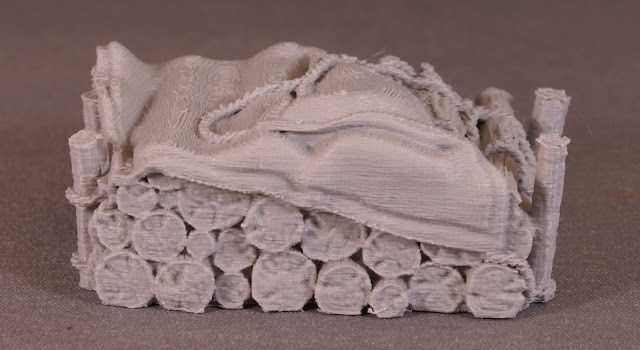 Items like these are exactly the reason behind my taking the plunge to get a 3d printer. And yes, I can say I will very likely print more of these as they will be so useful!

Having finished these today, & having the paints used handy, I decided to show the process. The paints are laid out left to right in order of use. 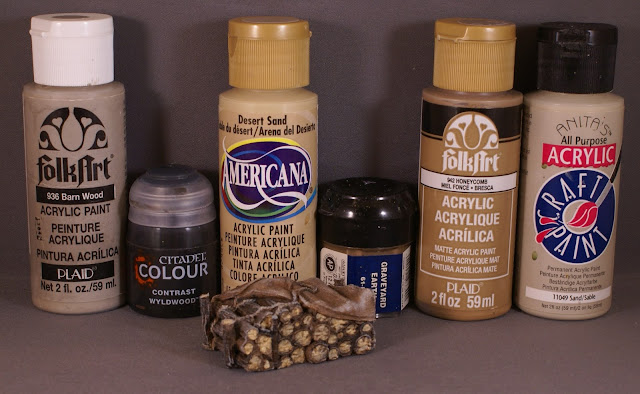 As I was debating the decision to use a more modern theme...ie blue or orange tarps, I was thinking that a more neutral one would be better, as then it could be used for any system or era I was gaming, be it Western, Pulp, WW2, or even medieval or fantasy.

So I opted to use a brown canvas type tarp to cover the wood.

Then I realized, as I could easily print off more, to actually do up the 2nd one off the printer with a blue tarp. I realized as I posted the image, the Graveyard Earth should have been removed. 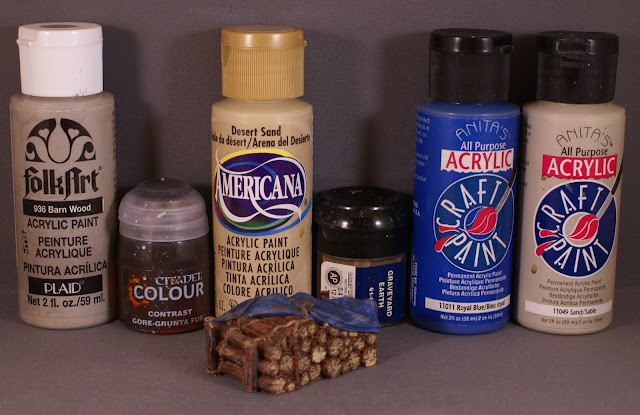 So here they are side by side. I used a different contrast paint for each. As with most of the terrain I paint, my final item is the drybrushing of the Sand colour to grab the hi-points. It really helped the rope stand out.

Here are the 2 contrast paints used, so which do you prefer? I think both look good & may even mix the 2 on the next one I print.

So that's it for today, thanks as always for visiting.

Today I completed the last of the Skylark Crew. Here we have Faye & Marlowe 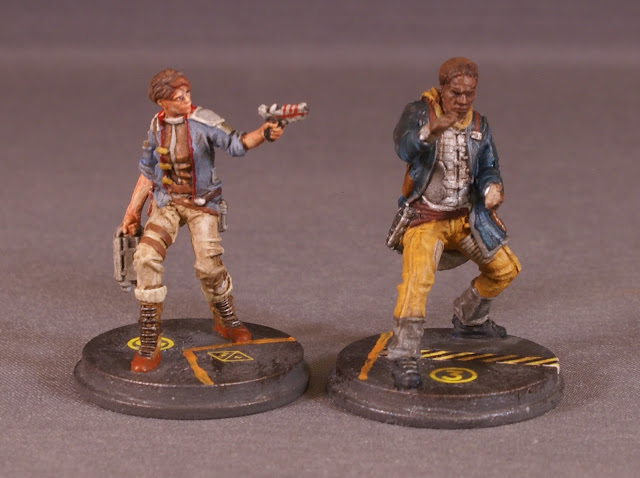 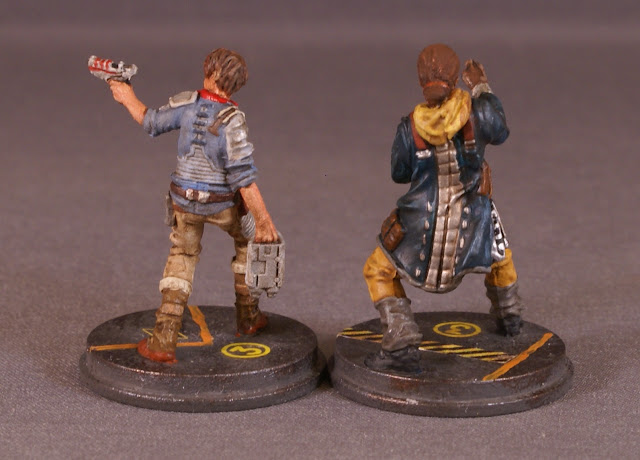 I am now working on a 3d printed Wood Pile I got as I believe a free sample during one of the STL Kickstarters. I am going to say it was likely the Fishing Village one I supported. There are also a few more Core Space figures that need to see the brush, so I expect they will be gracing the blog soon.

Continuing with the crew of the Skylark, here we have Captain Weaver 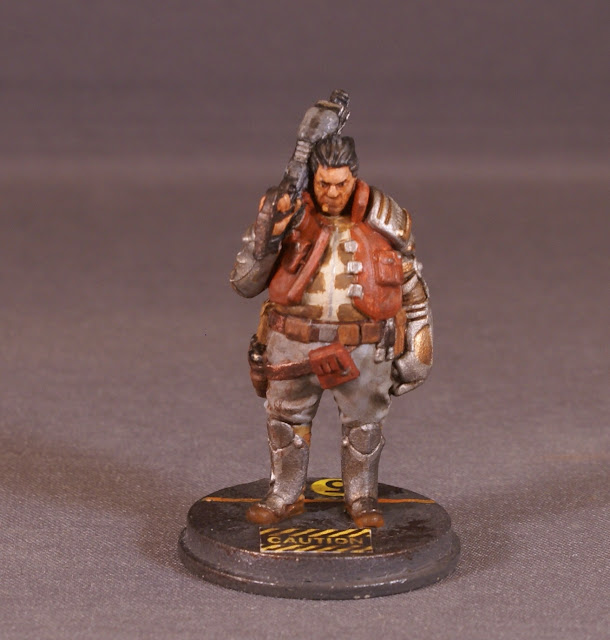 Another great sculpt with lots of details, pretty much ate up my whole paint session today. 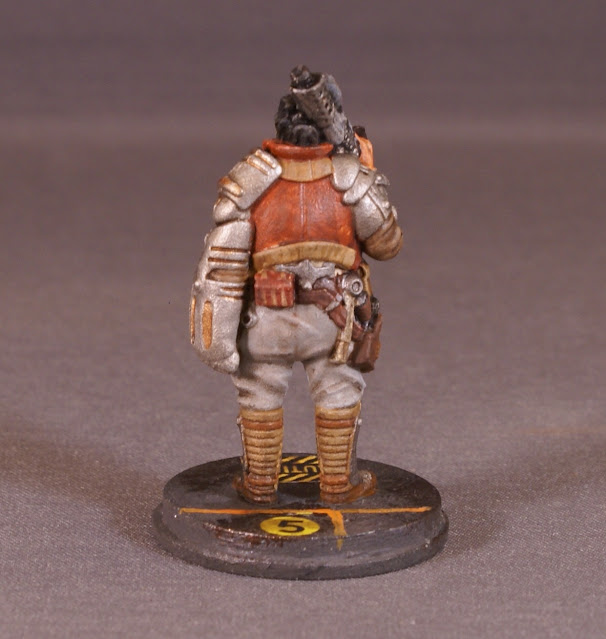 Up next will be Faye, & thus ends a very short post for this week!

Starting on another of the crews for Core Space. Next on the paint table is the Crew of the Skylark.

Generally I will start with the Captain, however as I started working on MAC, he quickly became my focus (& compared to the others, quicker to paint) 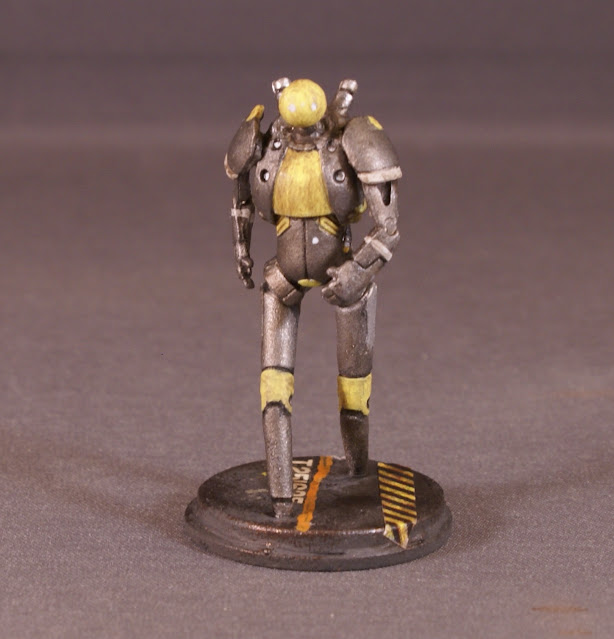 Another excellent figure & from a quick read of the description, is an autonomous robot that has developed some sentience through software upgrades 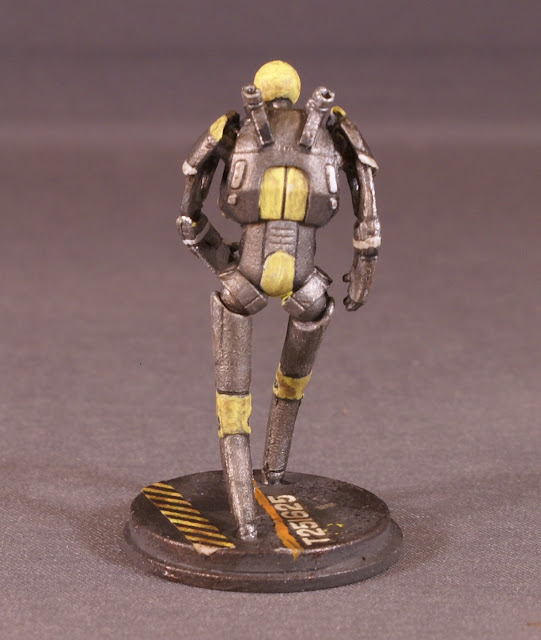 The remaining crew are on the paint table & will be coming soon.