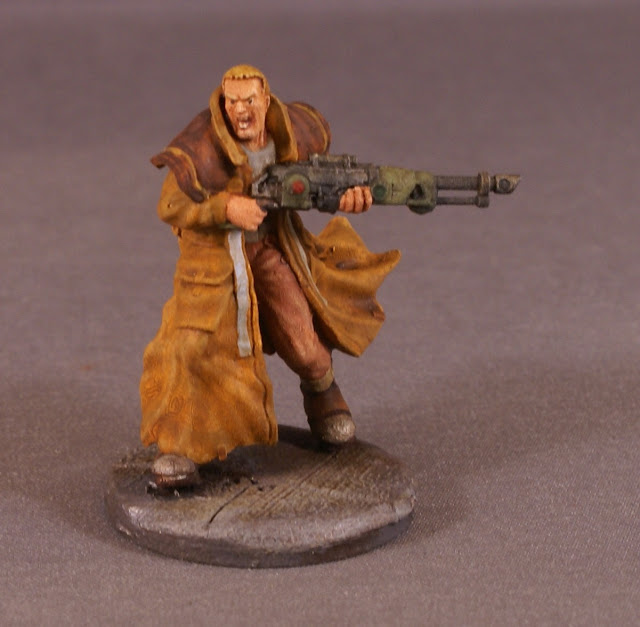 Another of Bob Naismith's figures, this guy has to be one of my favorite! Nice solid model in a dynamic pose & verbally assaulting those around him. 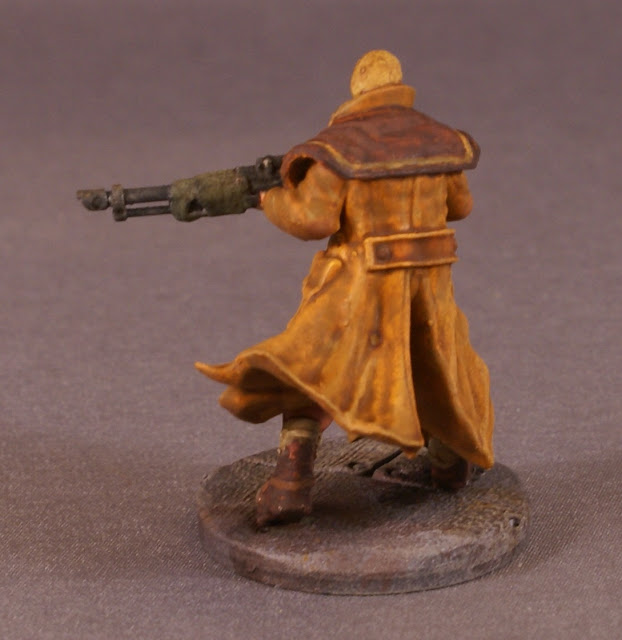 Who else loves how Snakebite Leather looks on a miniature?

Onto the next members of the crew.

Posted by Terry Silverthorn at 3:52 PM No comments:

Now that I've got my resin printer running (to use up resin which has past its expiry date). I've been printing a lot of the figures from various Patreons I follow.

So I've chosen my first crew to be one of Bob Naismith's figure sets from his Patreon.

This is the Crew of Dante's Revenge.

Now of note is that Bob didn't generate this crew for Stargrave in particular, so it's lacking a couple of members. As well I will be swapping out the cat for another figure. I've chatted with Bob about starting to make 10 man crews & pointed him to the Stargrave Crew generation pdf as a guide to what a crew can be comprised of.

With that being said, here are the first 3 figures I've completed. Dmitri, Rosenina (the Captain) & D8V6

Apart from the Captain, I haven't chosen the soldier classes of Dmitri & D8V6. However I expect due to Dmitir's weapon he will be one of the heavier classes of soldier.

Once I get the figures all painted, I will create my crew roster with stat's. So I will be working on the remainder of this crew during the week & then likely back to my BEF list figures.

Today I finished up with the Platoon Sgt & Boys-AT Rifle team. In fact the glue isn't even dried on the bases yet 😀

First we have the Platoon Sgt. This is a metal miniature from 1st Corps, which counting the original chevrons was merely a Corporal, but he got a field promotion & an additional painted chevron. 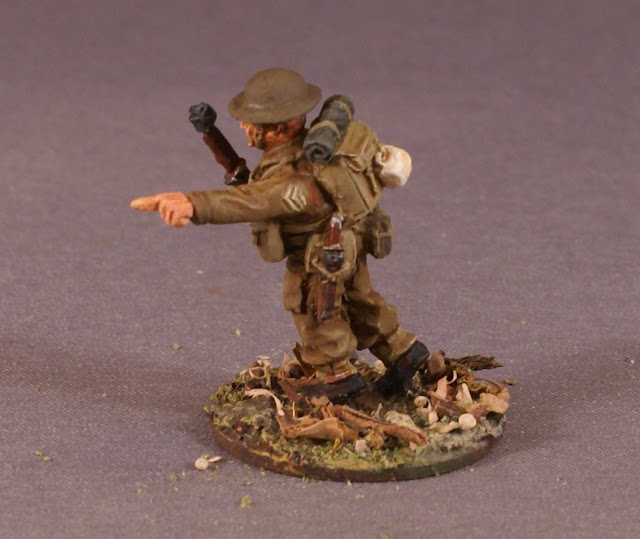 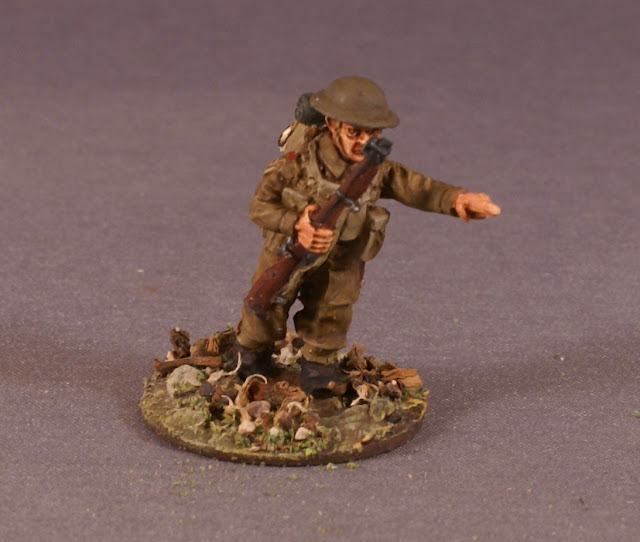 Next is the Boys-AT Rifle team. Again these are from 1st Corps which has a fairly extensive range of figures for the BEF. 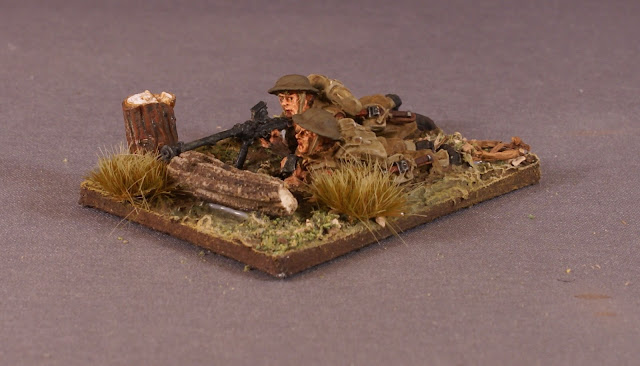 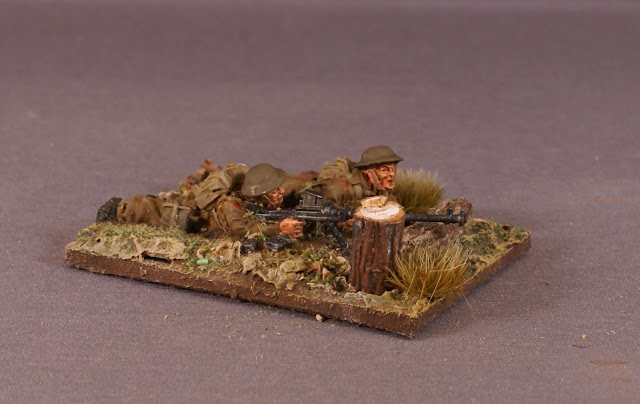 Here is an image of the Platoon HQ. Of note, is the Boys-AT Rifle needs 2 members from a section to deploy it as it comes without crew.

Next we have the Infantry Platoon 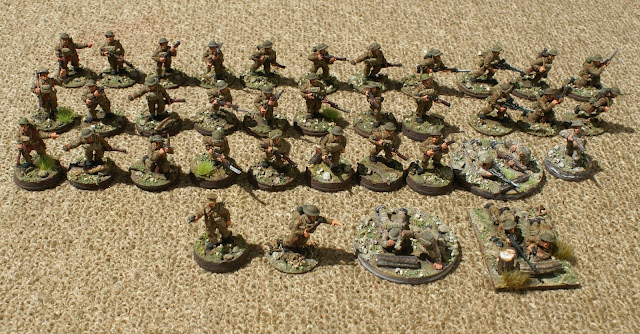 And finally a photo of the completed BEF force thus far. 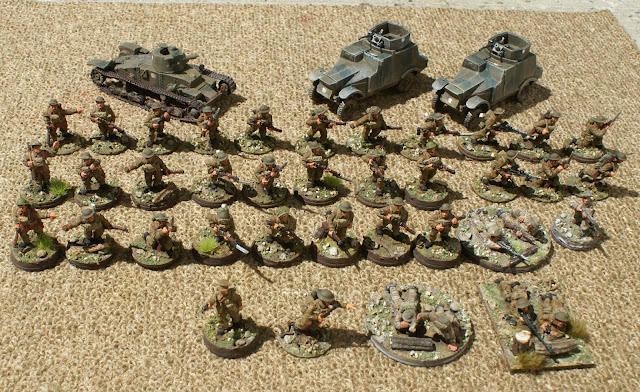 So what's next? Well I will begin working my way down the support lists. I've already selected out a Medic & Adjutant figure. Thanks for visiting.

Something Lurking this way comes

Today saw the arrival of a somewhat heavy box on my step. Peeling back the covers, it was soon revealed... 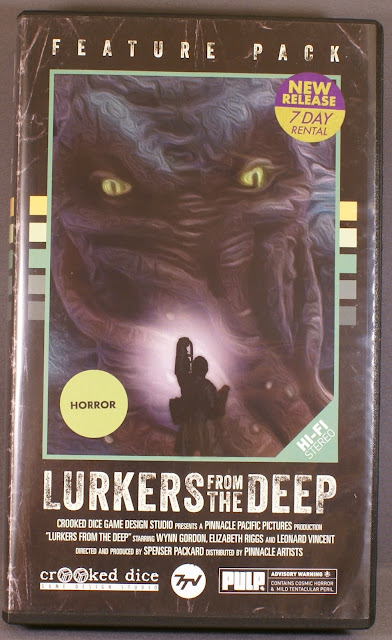 Lurkers from the Deep had arrived. Surely I just heard the echoing sound of crashing waves as I removed the vintage VHS case.

YES! It has arrived. Mostly consisting of Sarissa mdf building kits, I went in for the Producer level of this Kickstarter. This box was a hefty 11kg. 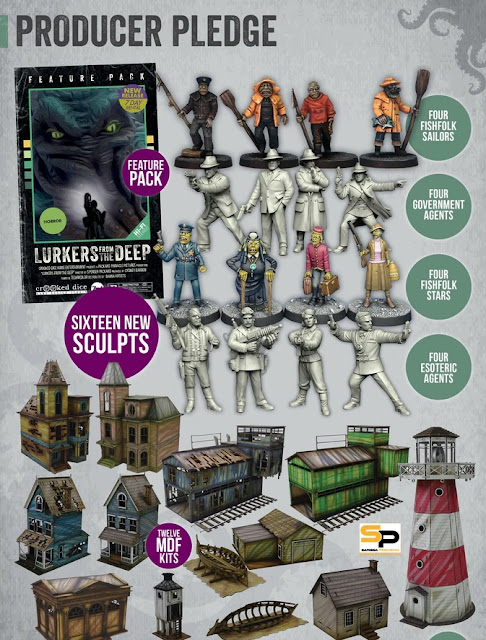 As an opportunity arose to add some other things, I also snagged the Ghost Village Bundle which though Western themed, can easily fit in with a small mid century coastal town. 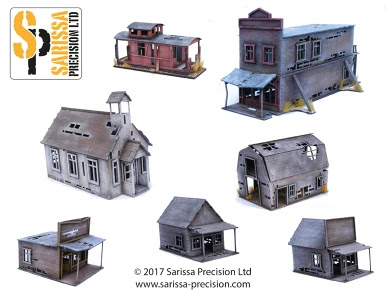 Thus another project has arrived for me to find some time to spend on it, which to that I can merely say...

With this post, it completes the core squads of my BEF platoon. Again, these are Warlord Games metals from their BEF Squad box. 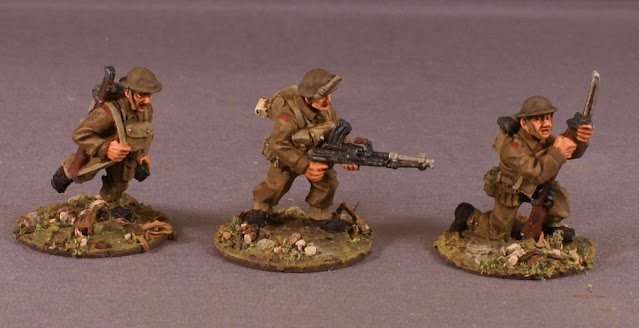 Some may note that these are the exact same 3 figures as I did for the 2nd squad. You would be correct, as it makes it easy to grab the correct figures when laying them out. Though to be fair, the 3rd man doesn't have anything to show he is carrying ammo for the Bren, so any figure would work.

So with these done, I just have the Platoon Sgt & the Boys-AT Rifle to complete the platoon. I will be starting on them today & hope to have them done for the weekend. Thanks for visiting.

Posted by Terry Silverthorn at 7:54 AM 4 comments:

Yesterday saw the completion of the 2nd group of Riflemen for the 3rd Squad.

As with the others to this point, these are all Warlord Games metal miniatures.

So something I discovered after lining these fella's up in their tray is I have an odd man out, so in fact I will have a spare guy to this point to use for another unit. 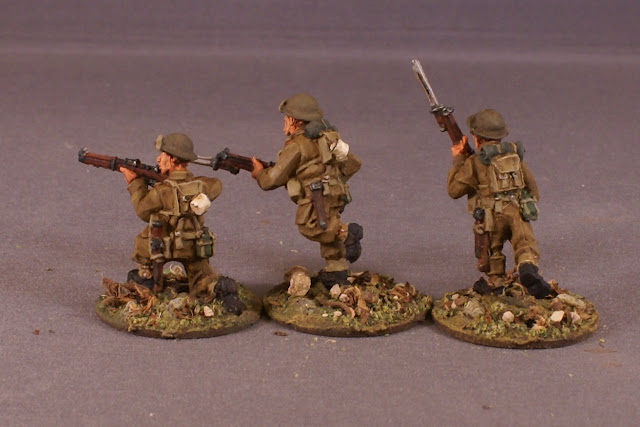 I also got well into the Bren Teams painting & expect to have them completed by Wednesday. After that its just the platoon Sgt & Boys-AT Rifle team to complete the core platoon.

Posted by Terry Silverthorn at 7:37 AM 6 comments:

Here we have 3 of the Riflemen for the 3rd squad that I've completed during my lunch hour paint sessions.

As with the others, these are all from the Warlord Games BEF squad sets. 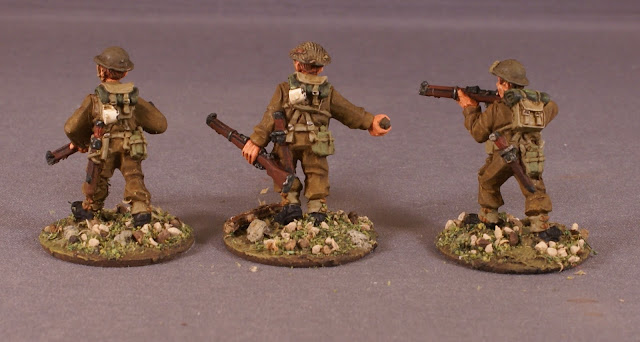 Posted by Terry Silverthorn at 7:32 AM 14 comments: