This morning before work saw the matte spray done on this Resin Fenryll Dragon. When I first saw this figure I was drawn to the fact it was chowing down on an unfortunate who thought a dragon was easy to slay. 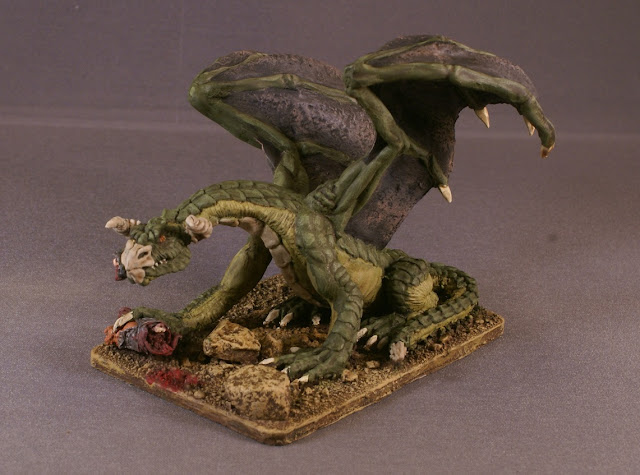 This was a multi-part kit, having had to glue the front legs & wings to the rest of the body. 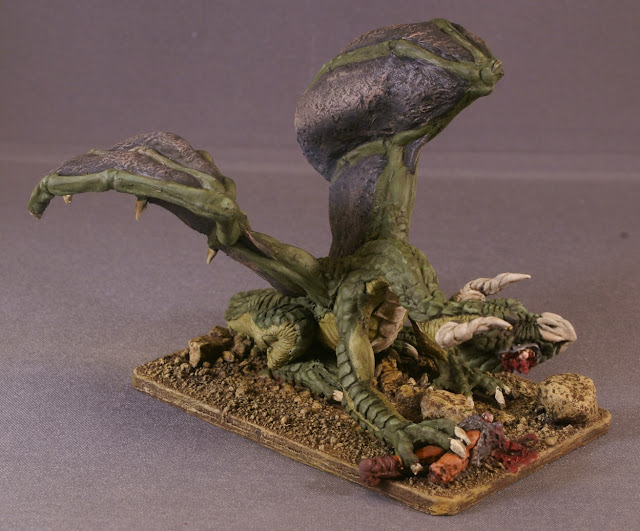 Not sure where he will see the gaming table, Frostgrave has no Dragons...yet! Perhaps a scenario in Mordheim? 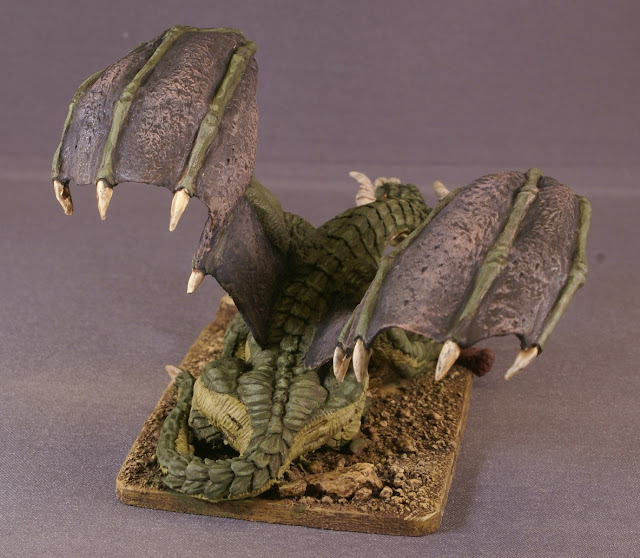 I also have 4 more soldiers almost finished as well as 2 terrain bits I've started on.

Frostgrave Thug & Infantryman, as well as some terrain

Now that I am done with gaming conventions (until the fall) & the majority of the town-wide garage sales have finished, I am able to start getting back to painting some stuff.

One of the things I've lacked is poleaxe armed Infantrymen. So after a trade for some stuff with Dave, I built this plastic figure from several bits. The second metal figure is another of the Gamezone peasants. Although he is wielding a nasty looking flail, I intend his use to be that of a Thug. 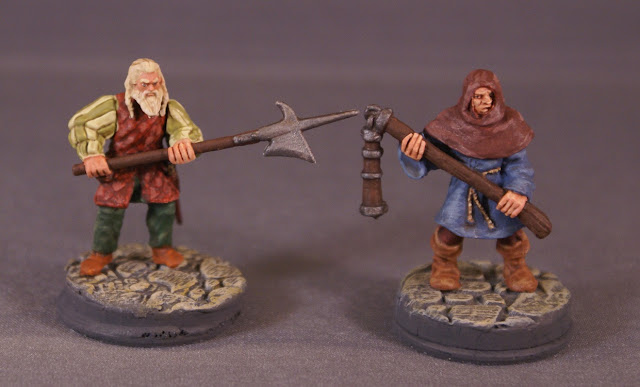 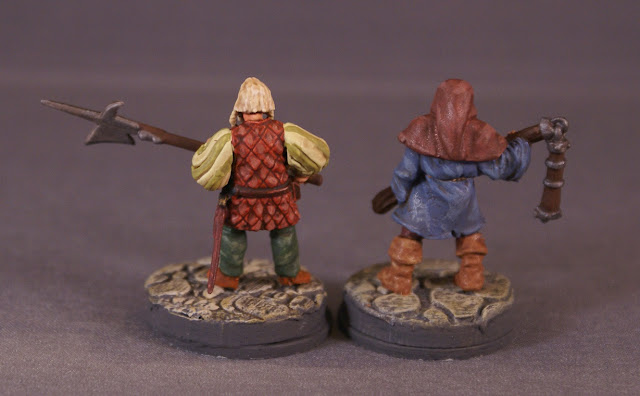 As part of getting some things off the paint table, below are 2 more hand carts finally painted up. These will find use in several gaming era's.

One of my Garage Sale finds, was this piece, likely from a Disney Aladdin toy of some sort. I liked the meditating figures & thought this would make an interesting piece, which could be used as a Magical Focii to improve spell casting or some such. 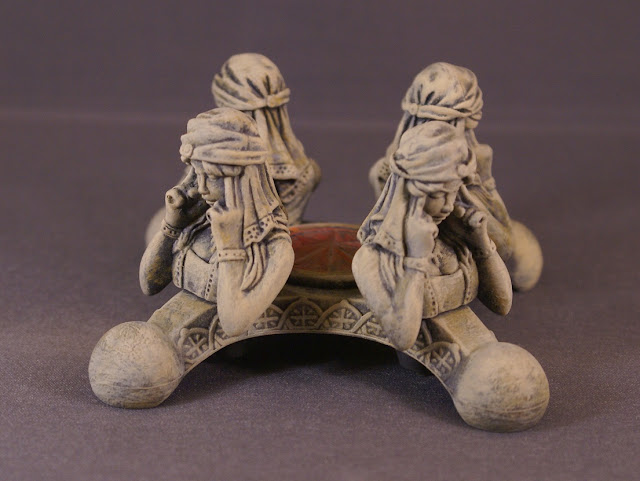 I painted up the centre in red to make it stand out. Not bad for 5 cents. 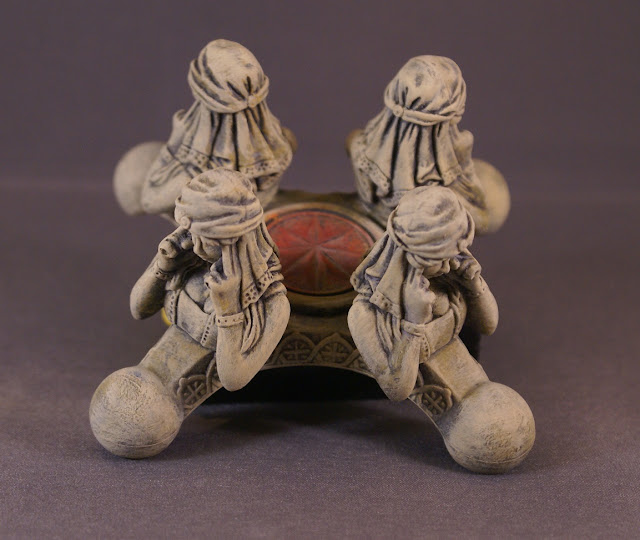 This next piece is from the Gale Force Nine - Battlefied in the Box series of 28mm terrain. I still kick myself for not snagging the ruined fountain piece as it would make a perfect pool for the scenario! However this piece is the Fallen Angel. It came pre-painted in a black/dark gray/gray scheme. 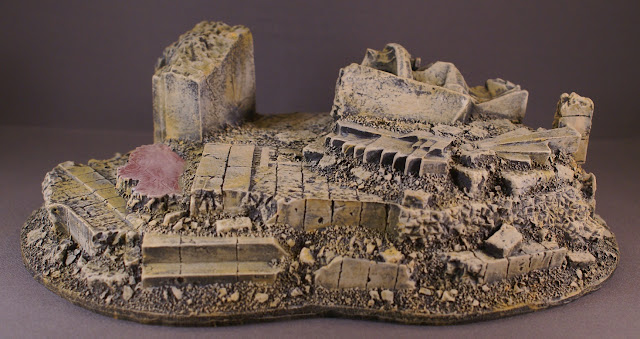 I wanted to go a bit more with my stone palette so some drybrushing ensued. 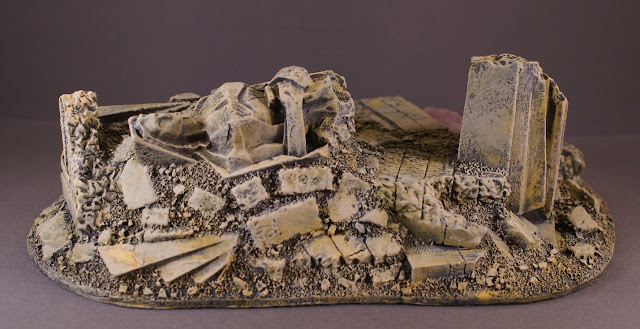 Here it is with a figure for scale. 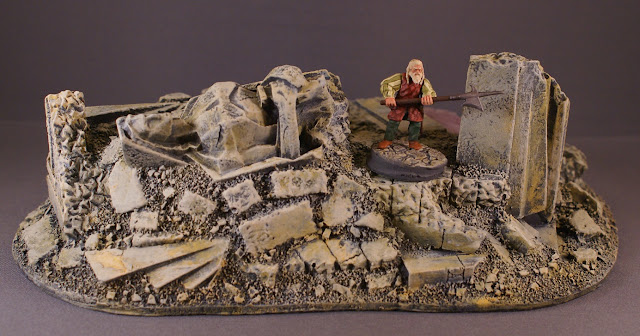 Thus ends what I managed to get through on Sunday. I have quite a few varied miniatures still on the table I want to work through. These include Pirates, Zombicide Zombies & some more figures for Frostgrave.

Today we played our next scenario of Frostgrave, this time vying to recover a tome of great power (a grimoire containing 3 spells) from the Library of Frostgrave.

The rubbled ruins were only the first test to overcome. 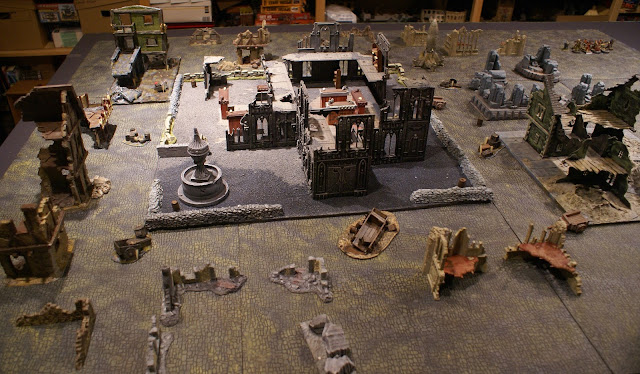 A stairway within the complex led to the lower chambers, wherein the tome lay. 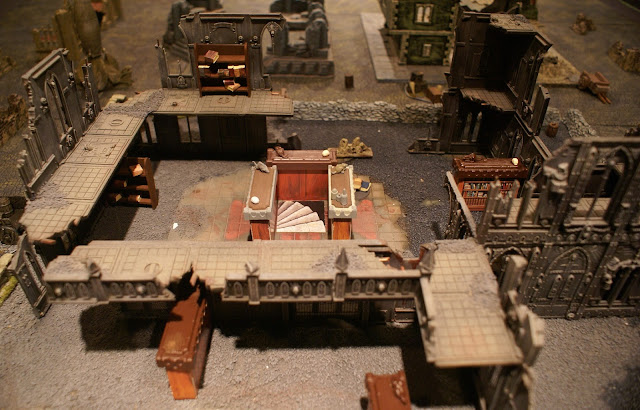 There was only a single way into this level, however there were 5 other exits, which led to catacombs & would provide a randomly determined exit point on the surface above. 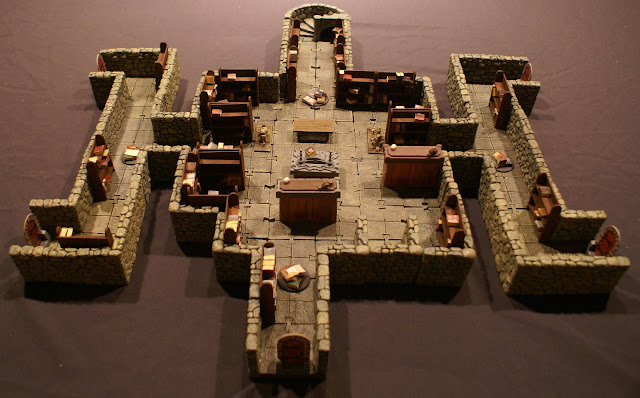 On a large alter, lay the Grimoire the Wizards sought. 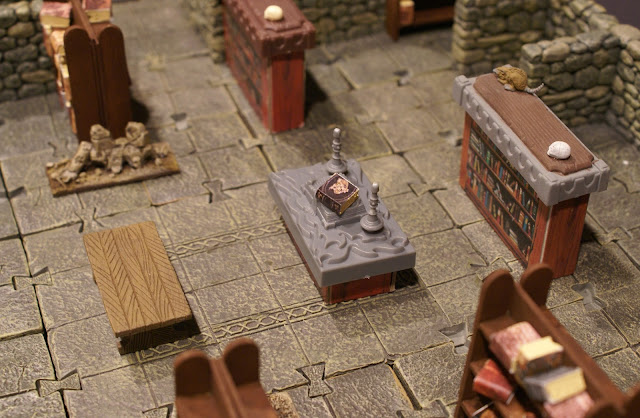 A new warband also arrived in the city, led by Stunty & his apprentice Stumpy. He was quick to prevent Julio's warband from targeting him with missile fire by laying a fog spell. 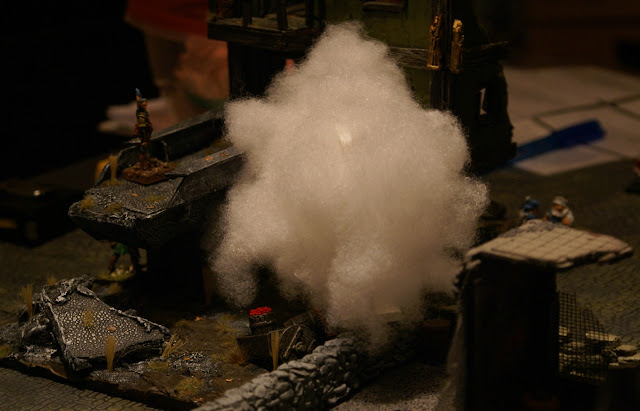 Ember arrives with her body guards, which now included a Captain. 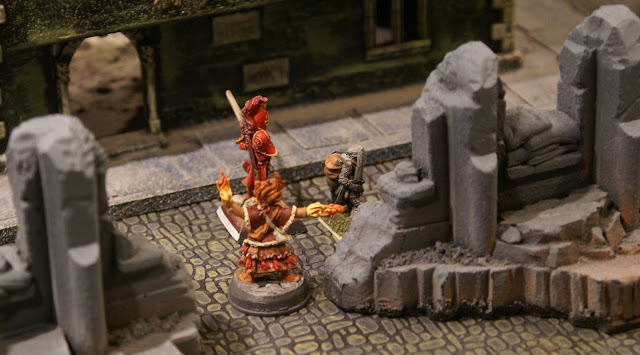 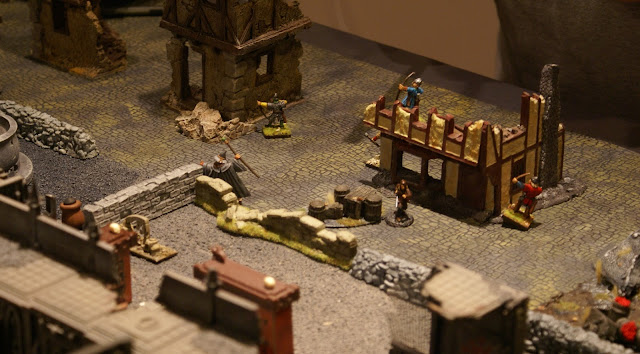 My treasure hunter was beset by 2 skeletons after snagging a treasure. He was wounded & things were looking pretty bad for him. 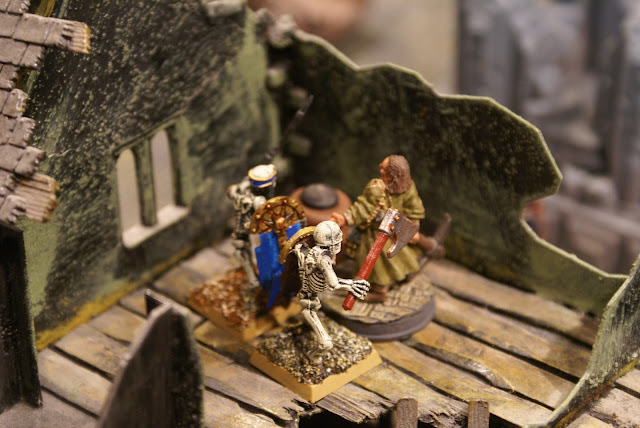 Some quick work by Ember allowed a Leap spell to pull him from further harm. He was then healed & able to continue the foray. 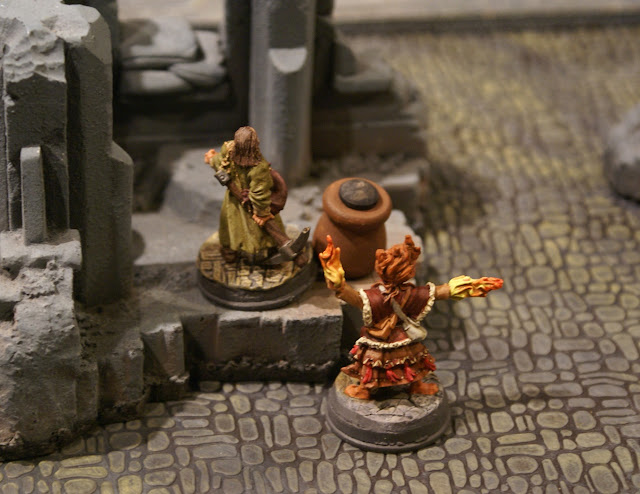 The skeletons then wandered off the end of the floor right onto an unsuspecting archer belonging to Cormac. 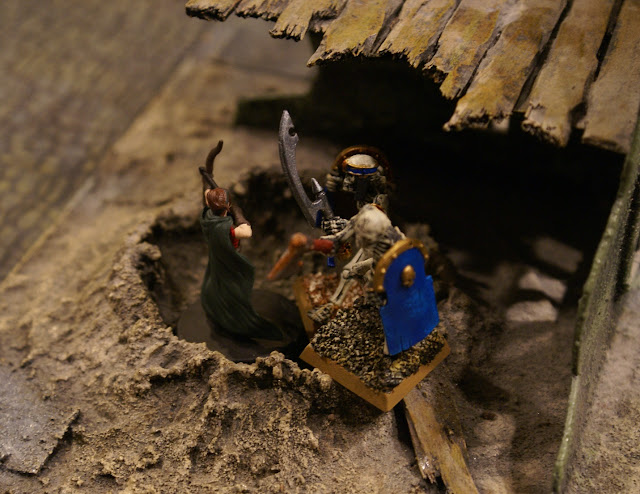 Stumpy managed to get to the lower level first, with a thief & marksman. Cormac was quick on his heels however with a Barbarian & Infantryman. 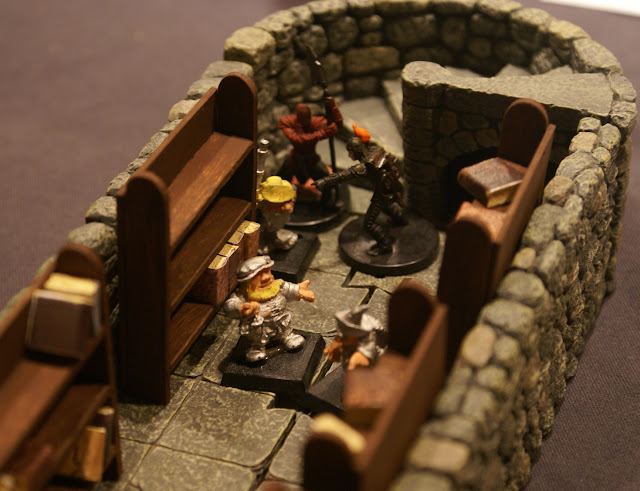 Cormac was felled by the Captain of Ember's band. 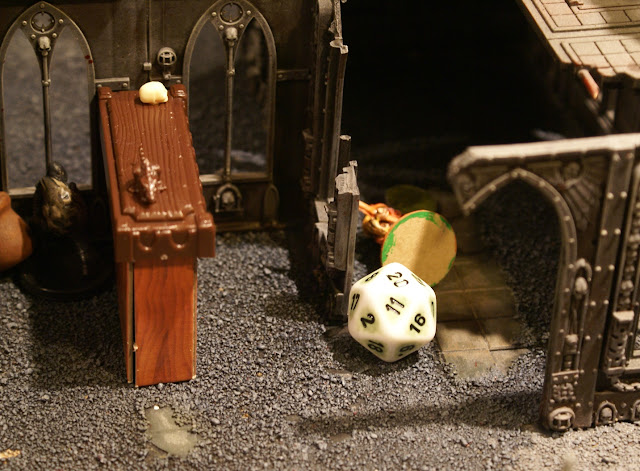 Shortly thereafter my Templar succumbed to a critical. 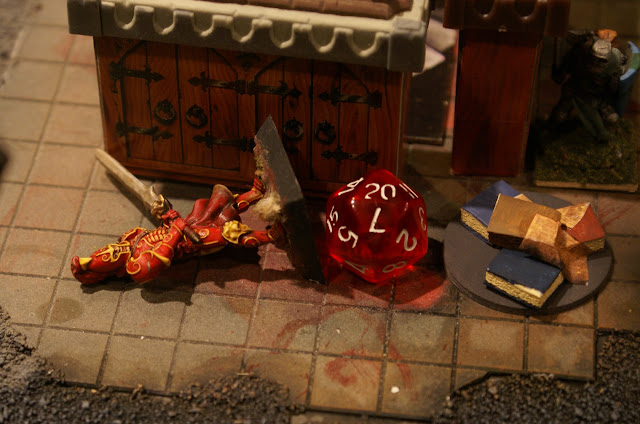 Below ground, Stumpy & the thief delved further within, leaving the Marksman to hold Cormac's troops in check. 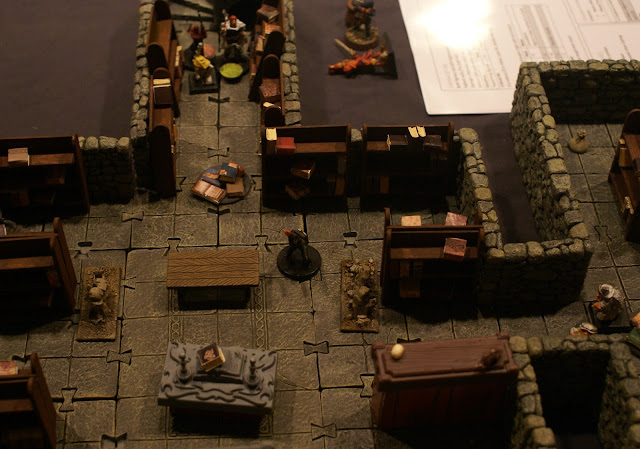 Julio was having a field day, once again critting one of my archers. 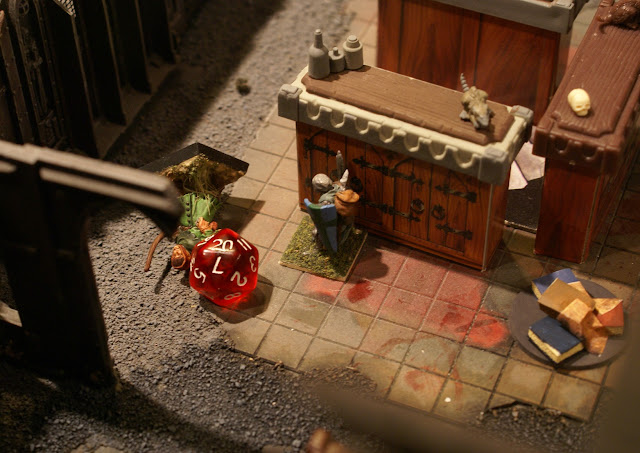 As Stumpy telkinesed the grimoire from the alter, a Book Worm appeared. 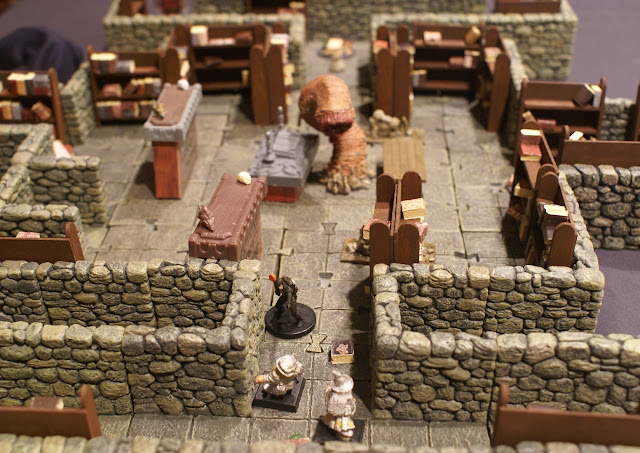 At about this time, Julio's luck began to change for the worse. One of his warriors laden with treasure was beset on by a wandering small construct.

"Aha! An easy victory" was shouted, followed by the construct rolling a crit. 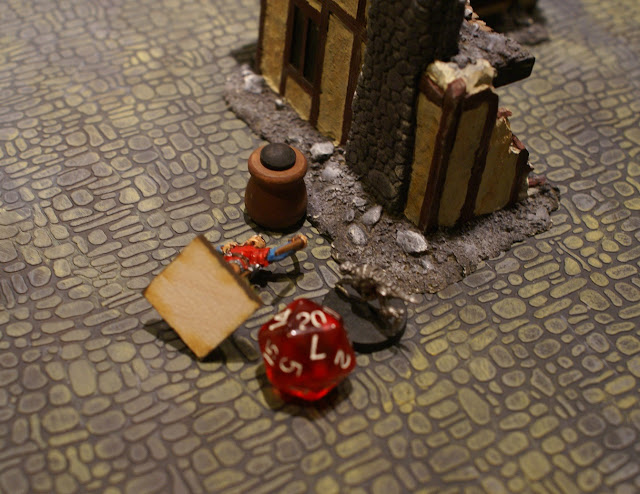 Stunty's marksman falls to a critical hit, as Ember & some of her warriors arrive. Things were bloody as first Cormac lost his infantryman, then both the Man at Arms & Captain were taken down by Cormac's Barbarian. The Barbarian was dropped by Ember. 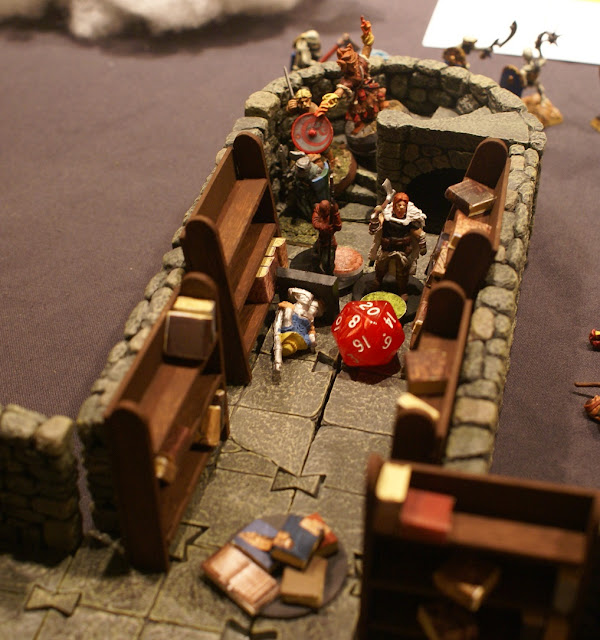 After a huge success by Stunty's wounded thief, who near slew the Book Worm with a single hit, the wounded worm received a critical hit from Ember 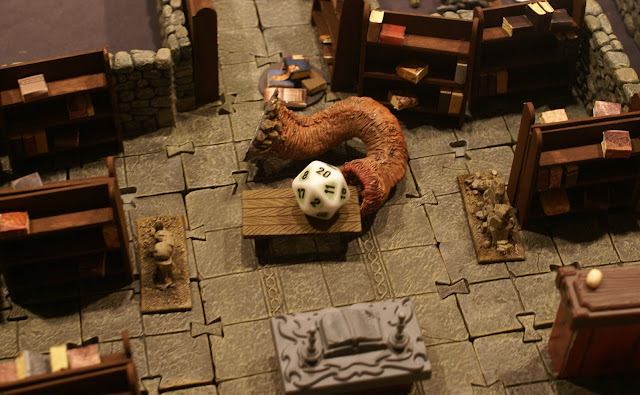 Julio arrived in the now near empty lower level. Upon snagging a treasure, he was beset by a Ghoul. His treasure hunter took a wound before Julio managed to slay it. As they were attempting to leave, another ghoul charged in.

Julio trying to save his wounded treasure hunter, was felled by a Critical hit! 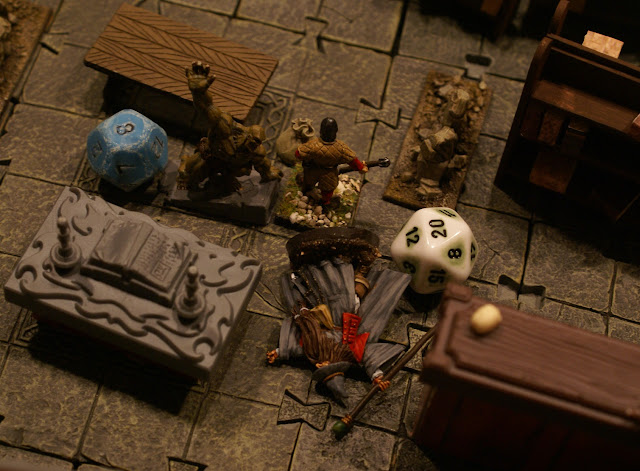 At this point the game was pretty much over. The much depleted warbands managed to scramble off to their bases.

Stunty had 2 warriors wounded & missing next game. He managed to get the grimoire off & found it contained Scattershot, Steal health, Animal Companion.
He also found another grimoire containing Absorb Knowledge & some Robes of Arrow Turning.

Cormac & Jimmy were both taken out of action (Not sure the results of injury). His band managed to retrieve 1 treasure containing a Grimoire of Elemental Bolt.

Julio was slain after falling to the Ghoul. His apprentice will now lead the warband going forward. His band managed to get quite a few treasures off & found them to contain a Banner of Courage & Grimoires of Fog & Enchant Weapon

Ember's band managed to retrieve 4 treasures. The band suffered the loss off the Man at Arms & the Captain was badly wounded (there goes another 100gp to correct this issue).
The treasures included a Ring of Slow Fall, Belt of Animal Repellance & Grimoires of Bone Dart & Steal Health.

Thus the warbands retired to dress their wounds & seek out replacements for those lost.