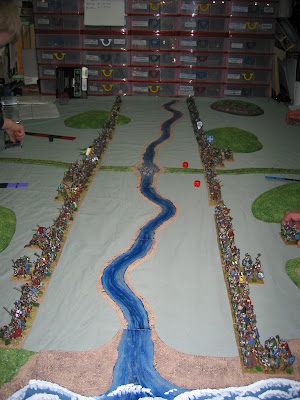 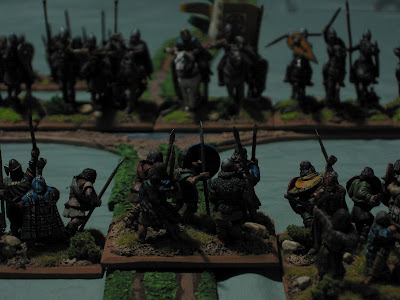 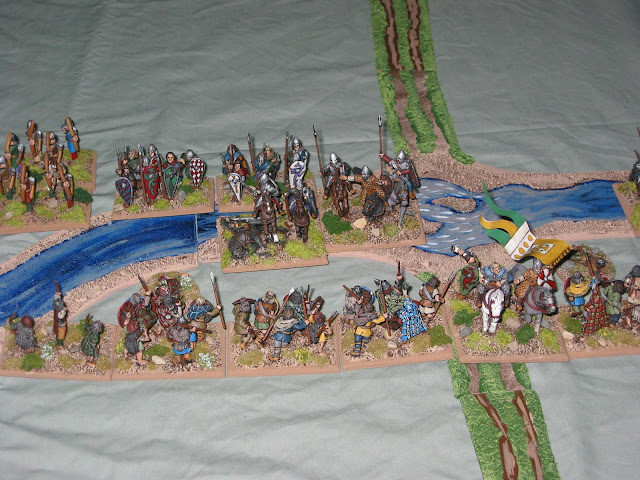 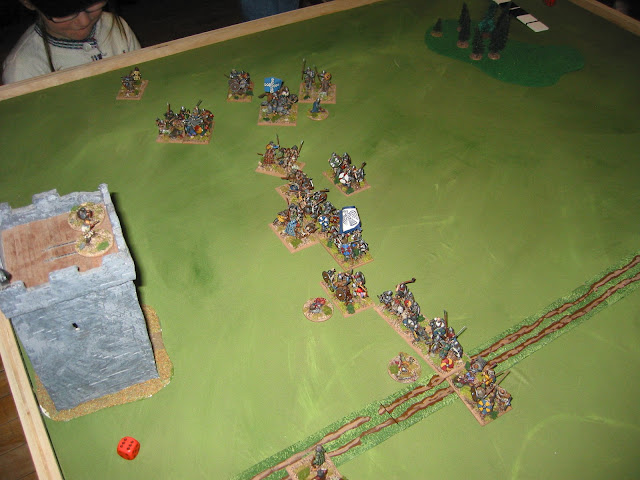 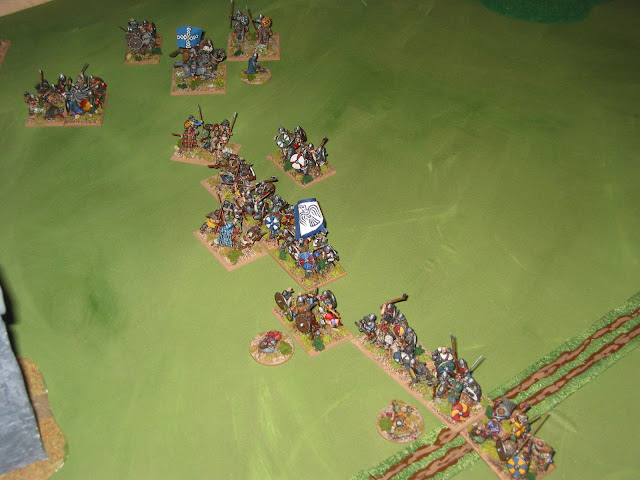 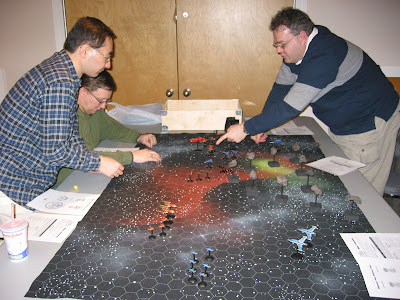 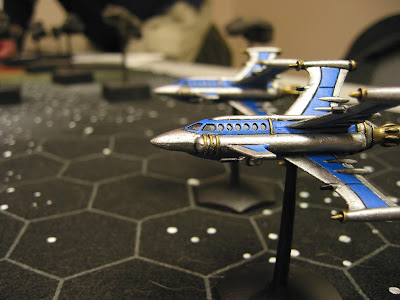 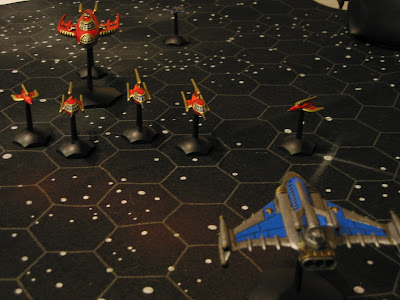 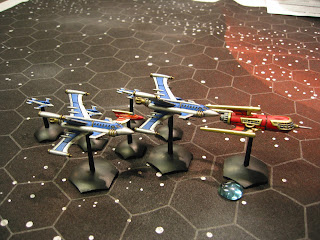 Posted by Terry Silverthorn at 10:20 PM No comments:

Well now it has come to it. The painting desk is ready for the most part..just some fiddling with the shelves & whats on them to do. Most important however is that I can now start painting my miniatures again!!!

Then it hit me. Where do I start? What should I do first? Have a plan? Just grab a box & start?....I think the last will become the norm after my first batch.

The fact that we will be playing some SAGA at Mayday, I decided it was best that I find (2 hours later) the warband I bought for this system.

So here we are with the box of Welsh that I had bought when the game launched. All the figures in this box are equal to a 4pt warband.﻿ 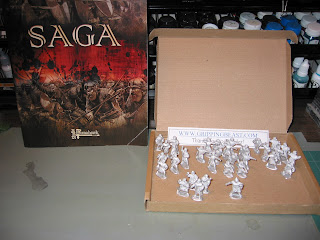 This closeup shows the figures split into their types..Warlord, Hearthguard (4 figures), 2 groups of Warriors (8 figures each) and a group of Levies (12 figures) 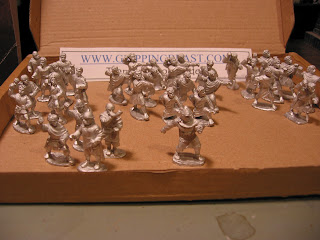 I figured I would start with the Warlord & his Hearthguard, so here they are with their bases removed & primed white.  The next time you see these fellows will be when they are completed. 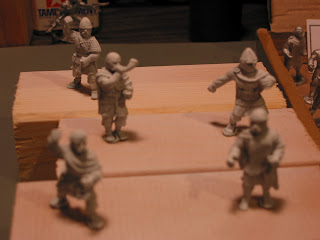 We gathered for our monthly DBA evening a night early this year, due to Valentine's Day falling on our regular Tuesday night.

As the hosts gathered it would seem fate smiled on me this eve...or perhaps  gave my opponents a cold shoulder, cursing their dice.

We each played two games this eve.  As I trundled forward with my Classical Indians (II/3)

My first encounter was against Chen and his Parthians (II/37) 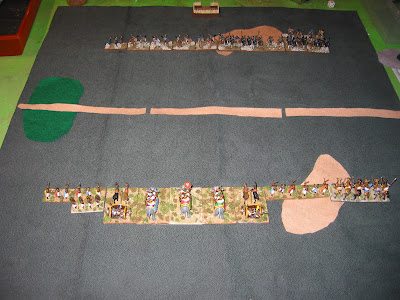 Chen attempted a sweep around his left with light horse and knights, which I countered with a holding action by my cavalry. I realized they would be a short solution to a bad situation there, so rushed forward with my main line against his knights 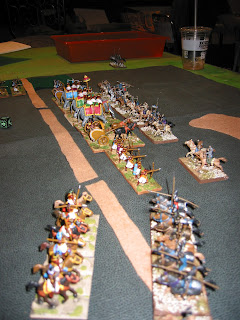 This is when disaster struck for Chen...a series of 1's against my 5's & 6's. His batttle line vanished under the elephants, his general seeing his forces plight threw himself under the chariot wheels.

The battle wasn't a total loss for Chen as he did manage to destroy the one cavalry he had closed the door on. Final tally 5G/1 for the Classical Indians 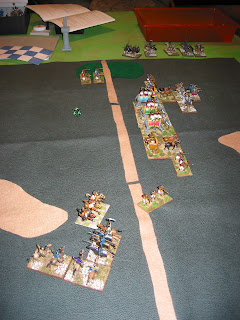 My next encounter was with Dennis and his Thessalian's (II/5d). The battle lines are arrayed with Dennis the attacker. 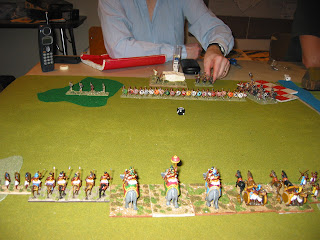 After attempting to confuse my mounted elements by riding his Lt Horse across the front of the battle line. The forces closed and fought. While his light horse were smashed under the tusks and feet of the elephants, he spear held, repulsing all of my elephants. The battle ended however as the Heavy Chariot managed to destroy a spear element. Final tally 4/2 for the Classical Indians. 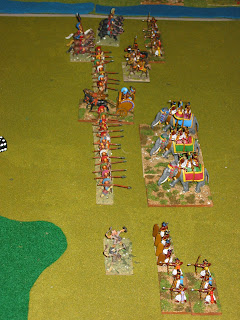 All in all a good night for me, compared with my dismal first campaign night.
Posted by Terry Silverthorn at 9:52 AM 1 comment:

WOW! Ok! I got it! 2 months since I last posted. Ok, here we go finally. Even got some photos.

Now with all the hubbaloo done, I have still been gaming at the club since November, but I haven't taken along the camera...no excuse honestly.

Tonight however, with Dave bringing out Kampfgruppe Normandie for us to play, the camera was a must.

This first shot is of the battlefield setup. The 7th armoured start in column on the road near Villers Bocage. 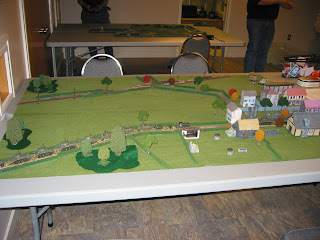 Here we have the lead column of Cromwells and a Firefly. Another column was still within the town, which is what my partner Kevin ran 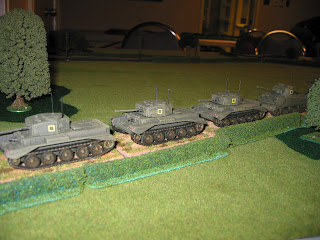 A shot of the town with Wittmen's Tigers about to pounce. 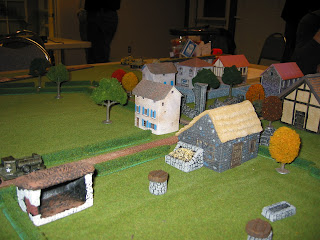 The first game saw the British draw first blood as a Tiger is brewed up. 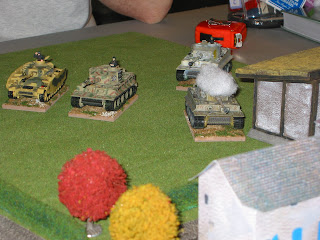 And the reaction by Shutzen Scott as he draws a 'chit' 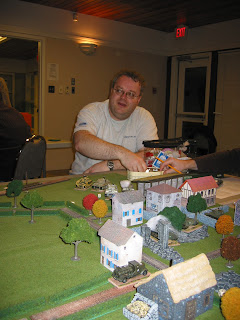 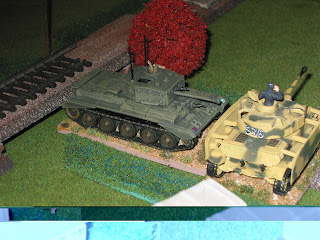 Unfortunately for that Cromwell, it was time for tea, though it did lead to the Panzers demise.

The battle ended with all the German Tanks knocked out.

So we switched sides. Kevin and I taking the role of Wittmen's troop. Wittmen had to bail out of his burning Tiger and rushed over to take command of the tank seen here, and managed to single handedly knock out the entire troop of Shermans that snuck into the rear. That added to the tally of a further troop of tank caught by the Tigers within the town. 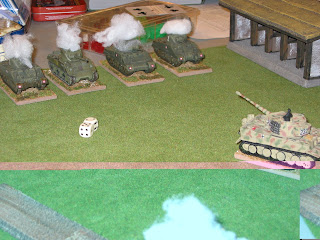 All in all a very interesting set of rules. When vehicles were knocked out, the side losing the vehicle/element had to draw a chit to see how much "morale" their side lost. We never did see either side reach their break point. Another interesting aspect is that there were some chits within the cup that provided a random event. Those who know me, know just how much I enjoy random things that occur within games.

So now I look forward to next Tuesday's DBA night.
Posted by Terry Silverthorn at 9:50 PM 1 comment: