So after returning to my buddies place on Friday night, a few hours sleep, a quick shower & bite to eat, I returned to Cangames for another full day of gaming.

The first game of the day was "A Village too Far" using the Face of Battle rules by Mike Ball. Again I joined forces with Glen & Richard to play the German defenders. Elements of the 101st Airborne supported by British Armour were pushing thru a small village outside of Eindhoven, Holland.

Here we discuss our deployment. 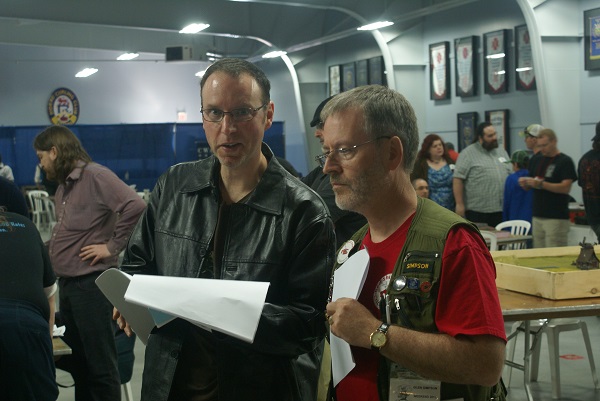 Richard took this opportunity for a self portrait, with a view of the battlefield below.

The British Armour deployed along the tables edge, while the Germans were hidden within the town. We had in effect, 3 squads of Falschirmjagers with a Stug III & an adhoc PzrJager R35 with a 47mm Cannon. We also had several Panzerfausts & 2 Panzershrecks. 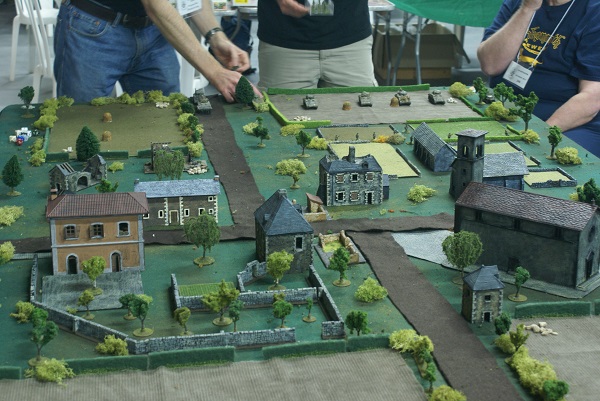 Our forces objectives were to hold the stone buildings, as well as destroy the British Armour & prevent them from breaking thru.

The armour slowly advanced piecemeal with several tanks on overwatch. They didn't know that we were also moving into position & thus lost time while we deployed. 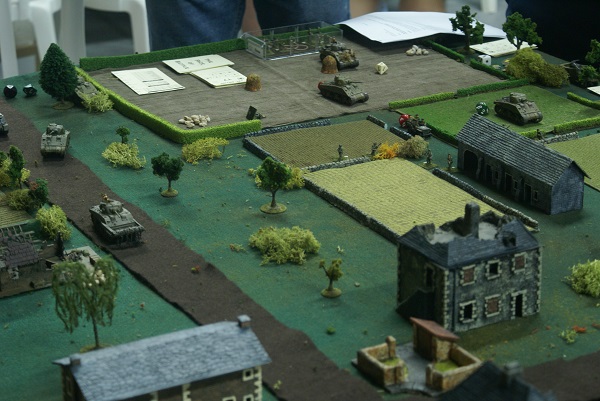 The PzrJager R35 was perfect for positioning behind a stone wall, its gun carriage was high enough to reach over it while most of the tank was hull down


I was able to disable/destroy the Sherman Crab and another Sherman trying to move up the road with my Panzerfausts, this did however leave my infantry without any further AT weapons. 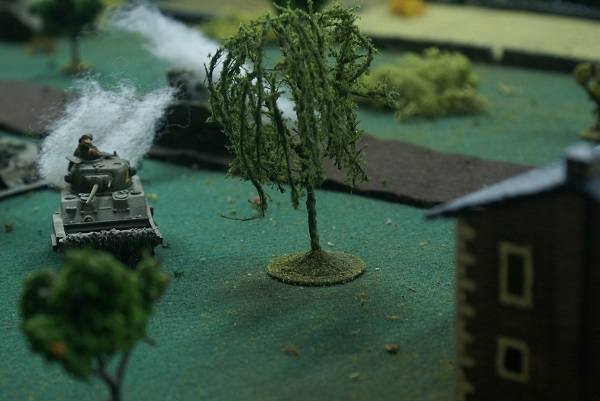 We also had a wrecked armoured car which we deployed on the road & it did indeed draw fire when spotted, saving one of our 2 tanks from a shell

A photo taken from the ground troops view.

As time was drawing to a close, the British Armour started to try to race thru the German defences, which made it very hard for the Germans to hit them, of course they were not doing a good job of hitting anything either. 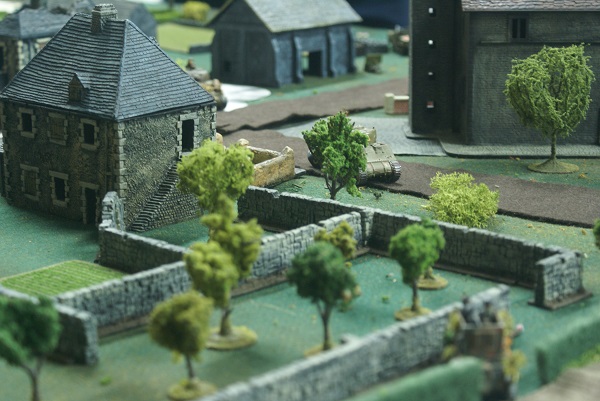 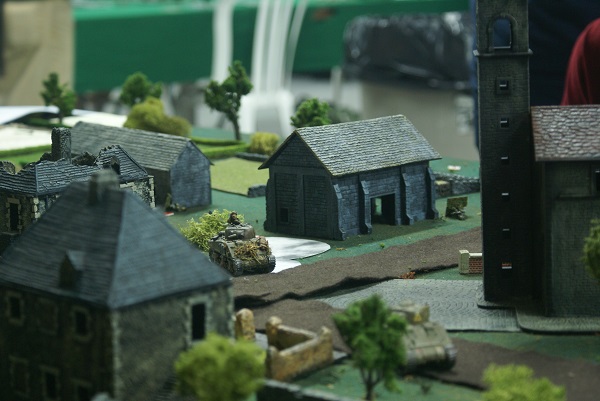 This allowed the Germans to garner a decisive victory.
Afternoon:
My afternoon was spent playing in a scenario called "Doctor Who - Battlefield Armageddon"
Using the Doctor Who Miniatures Game II, Brian Hearnden had elements of UNIT under attack by Arthurian Knights from the Future. As most of the games of Doctor Who I've played with Brian, they are all based on actual episodes from Doctor Who. 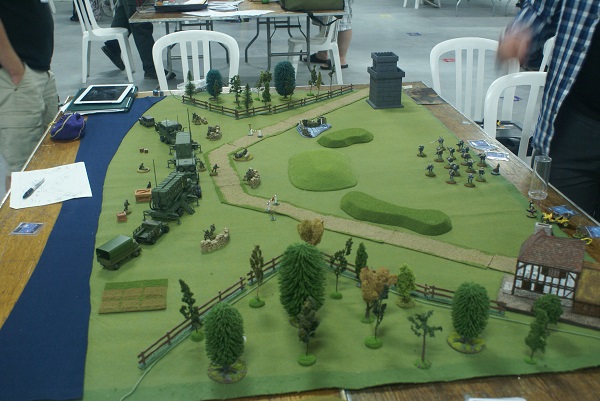 Elements of UNIT were guarding a convoy of Nuclear Missiles when Morgaine & Mordred attacked looking to unleash the Destroyer. 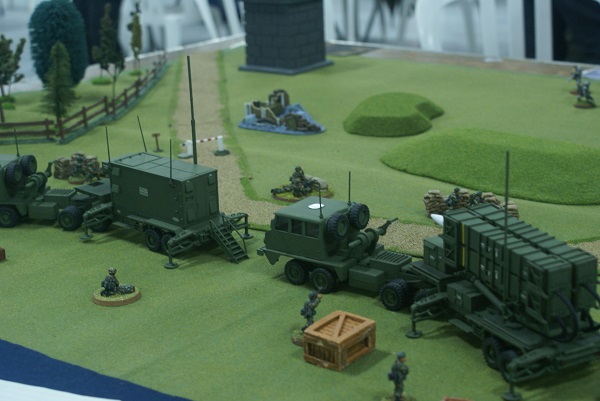 The Doctor & Ace arrive in Betsy to assist Brigadier Winifrid Bambera & Ancelyn, a knight from another dimension. 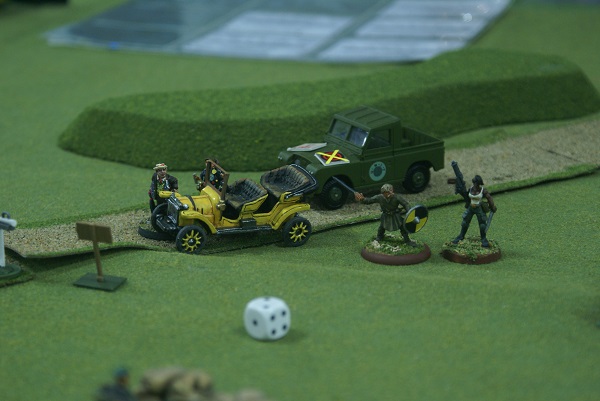 After Morgaine uses magic to blast into a covered archeology dig, Bambera & Ancelyn attempt to stop her, but are rendered unconscious. 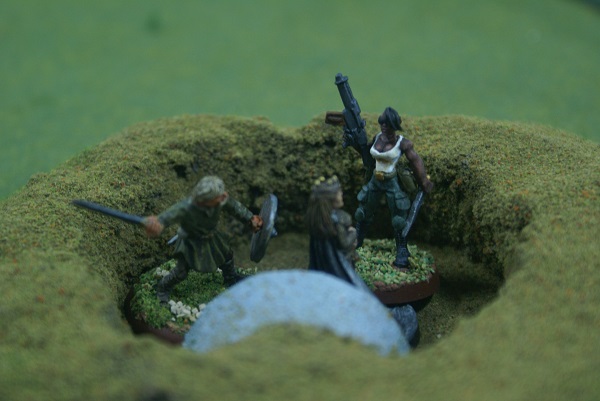 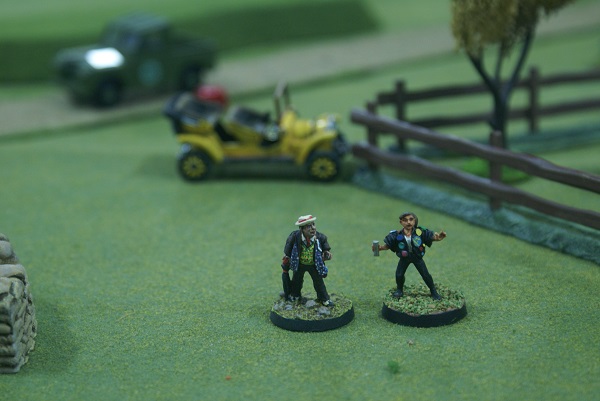 Inside the buried ship, they find the tomb of Arthur & are able after several tense turns, foil & disable Morgaine. With the Destroyer once again banished & the door to the room sealed with the aid of his sonic screwdriver, the Doctor was able to encourage Mordred to leave for the safe return of his mother. 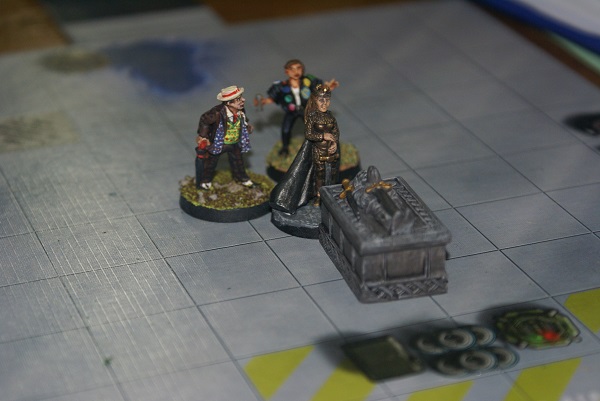 Evening:
My evening game was playing in the always enjoyable Rubberboots (Pulp) game run by Tod Creasey.
The scenario this year was "Rubberboots & the Cry of the Valkyries" using the Bolt Action rules. The synopsis was -  The end is nigh for the Reich as the allies close in on a secret Alpine industrial complex.
As is usual in this game, each player had their own objectives to obtain while attempting to deny the other players from getting theirs.
I got to hang with Rita (The Nazi She Wolf) & joined her with my own character Silberhelm of the SS. We started the game in the light coloured building & had the mission of secreting out Robo Hitler & my main objective was to get out with the case of secret papers. 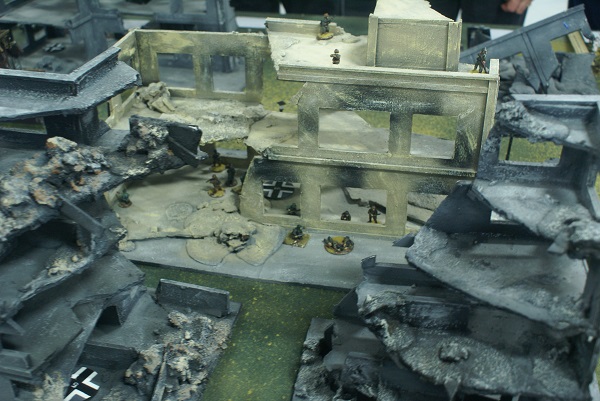 We also had some Mech's to defend our escape. Rita & I were given 2 options to get Robo-Hitler away, we could either call for a U-boat or an aircraft. We chose to try for the U boat. 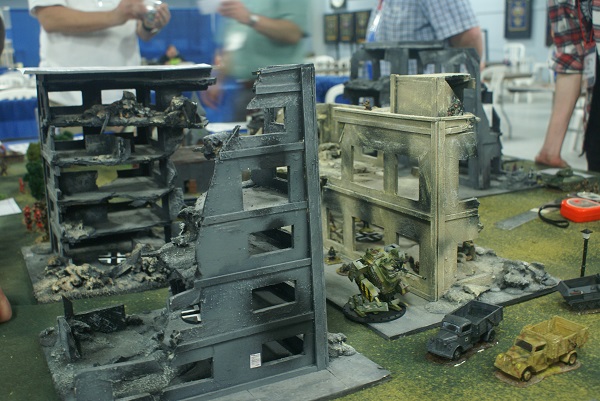 The allies also had Mech's to try to stop us. 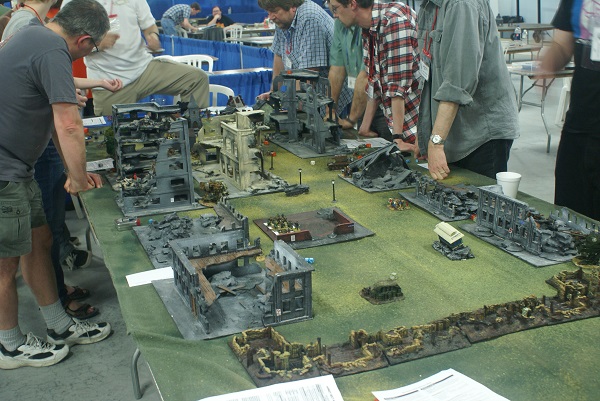 Added to the mix were various factions of Cultists who summoned bizarre beasts & dinosaurs. 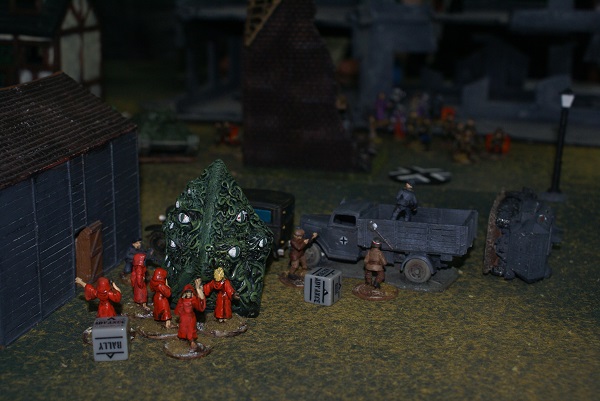 Luckily the cultist forces were our allies & covered our withdrawl, (unknowingly). 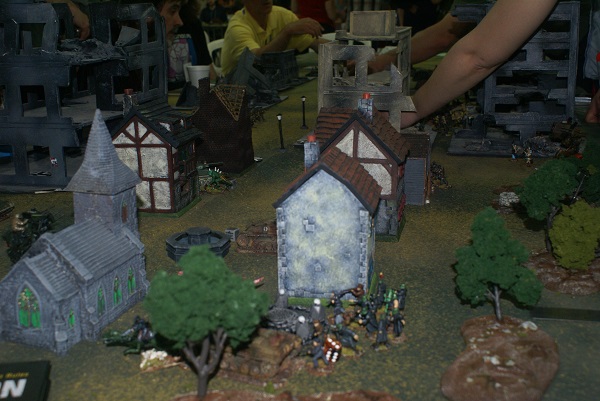 Alas, our escape was foiled by the untimely hole punched thru the U-boat by a PIAT followed by a failed morale test by the crew. They sailed away leaving us behind.

Below is my force commanded by Silberhelm. 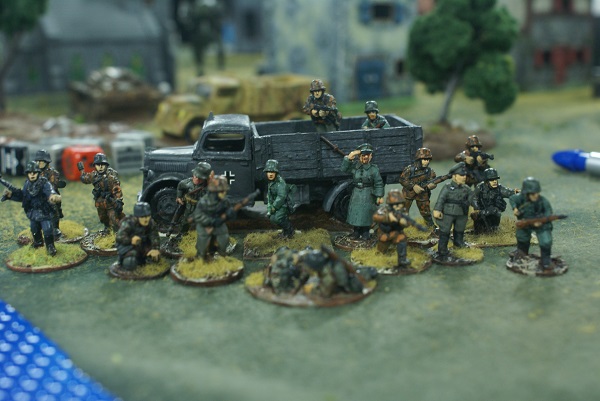 Another shot showing the combined forces of Silberhelm & Rita the SS She Wolf. 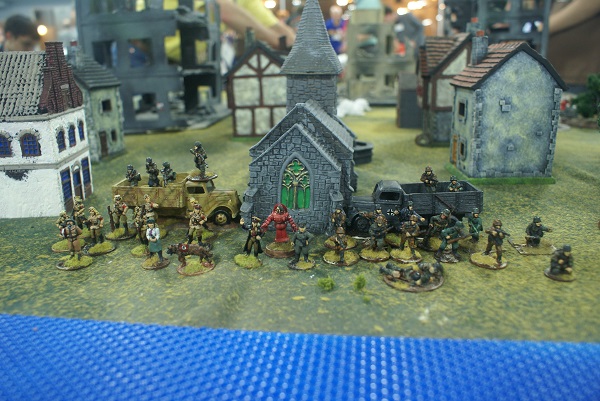 Lastly an image of the real life Rita & myself. 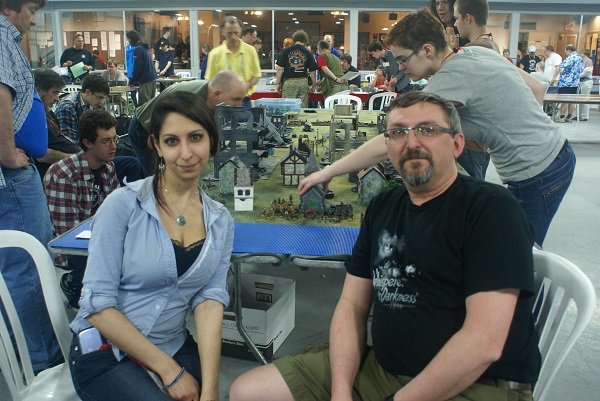 This game is likely the hi-light of my Cangames weekends, & I look forward to bringing forth Silberhelm once again in the next installment of Rubberboots!
I will likely post Sundays games within the next couple of days.
Posted by Terry Silverthorn at 8:28 PM